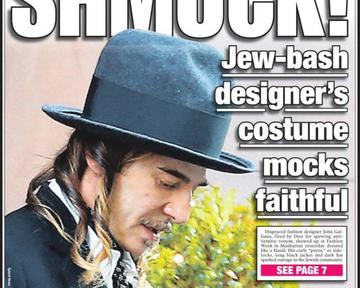 And now something about John Galliano: Galliano fell out of grace after making anti-Semitic remarks and praising Hitler. But he is back, as a Hasid, according to Eric Wilson in The Times:

“The startling designs that made their way down the runway were the clearest sign yet that Mr. Galliano, who was dismissed from the house of Dior in 2011 after a drunken anti-Semitic tirade at a Paris cafe but who has been sitting in as a guest in Mr. de la Renta’s studio for the past month, may be contemplating a professional comeback.”

“On Wednesday, The New York Post published on its cover a photograph of Mr. Galliano wearing a designer outfit that the newspaper characterized as bearing a resemblance to Hasidic attire.”

According to Ha’aretz Mr. Galliano has some defenders:

‘Galliano's representative did not immediately respond to a request for comment, but Abraham Foxman, national director of the Anti-Defamation League, leapt to his defense.
"Here is a man who made a mistake and he's been on a pilgrimage to try to learn and repair. And people instead of embracing his return are trying to distort and destroy him," Foxman said.
Galliano has been in New York working at the studio of Oscar de la Renta, who invited the designer to return to fashion for the first time since the incident.
Galliano was not in the audience of Tuesday's de la Renta runway show at New York Fashion Week. The photograph was taken in the street by celebrity photo agency Splash News.
Foxman pointed out that Galliano was wearing blue, not black like a Hasid, and a gray hat without the standard wide brim.
"This is John Galliano, OK? He dresses eccentric," Foxman said. "He has long hair, they're not peyos" — the traditional sidelocks worn by Hasids.’

If I were running the Mossad I would hire John Galliano as an operative.