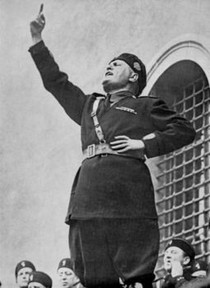 A friend alerted me to a funny and insightful article by Tim Parks about Italy:

‘Benito Mussolini, perhaps the first great propagandist of the modern era, understood perfectly this aspect of Italian psychology. “It is faith which moves mountains because it gives the illusion that mountains move,” he said. “Illusion is perhaps the only reality in life.” On Jan. 27, at a ceremony for the national Holocaust remembrance day, Mr. Berlusconi felt it was the right time to say that Mussolini had actually done many good things and was not such a bad guy. He was rewarded with another upward twitch in the opinion polls.’

(You can read the complete article here.)