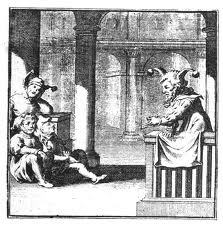 “And therefore, according to Homer's example, I think it high time to leave the gods to themselves, and look down a little on the earth; wherein likewise you'll find nothing frolic or fortunate that it owes not to me. So provident has that great parent of mankind, Nature, been that there should not be anything without its mixture and, as it were, seasoning of Folly. For since according to the definition of the Stoics, wisdom is nothing else than to be governed by reason, and on the contrary Folly, to be given up to the will of our passions, that the life of man might not be altogether disconsolate and hard to away with, of how much more passion than reason has Jupiter composed us? putting in, as one would say, "scarce half an ounce to a pound." Besides, he has confined reason to a narrow corner of the brain and left all the rest of the body to our passions; has also set up, against this one, two as it were, masterless tyrants--anger, that possesses the region of the heart, and consequently the very fountain of life, the heart itself; and lust, that stretches its empire everywhere. Against which double force how powerful reason is let common experience declare, inasmuch as she, which yet is all she can do, may call out to us till she be hoarse again and tell us the rules of honesty and virtue; while they give up the reins to their governor and make a hideous clamor, till at last being wearied, he suffer himself to be carried whither they please to hurry him,” writes Erasmus in “The praise of Folly”.

In 2001 I was commissioned to write a contemporary “In praise of Folly”, this resulted in my book “In Praise of Mankind”.

A theater group in Amsterdam adapted this book. Last night I went to the premiere, it is always confronting to see your book as a movie or a play, sometimes the writer cannot help but noticing that serious attempts were made to ruin his book. But yesterday I was more than satisfied, the play resembled a nightclub act, which is in the spirit of "In Praise of Mankind", and also in the spirit of Erasmus’ Folly.

Afterwards the actor and initiator (Sabri Saad El Hamus) said: "I can also perform in the living room of your mother."

Today I asked my mother: "Do you want to see this play in your living room?"