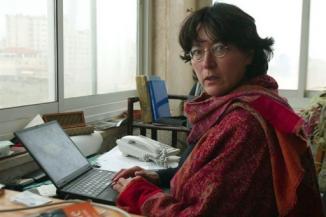 A friend alerted me to this article about the Israeli journalist Amira Hass in the Observer:

‘A prominent Israeli journalist, Amira Hass, has been subjected to a wave of hate mail and calls for prosecution for incitement to violence since writing an article defending the throwing of stones by Palestinian youths at Israeli soldiers.
Hass, who has lived in and reported on the occupied Palestinian territories for 20 years, argued that "throwing stones is the birthright and duty of anyone subject to foreign rule", and suggested that Palestinian schools should offer "basic classes in resistance".’

(You can read the article here.)

I had the honor to meet Amira Hass a couple of years ago in Jerusalem. (You can read my reportage about Israel, the IDF, Amira Hass and others here. More about Hass here.)

Now I had missed the op-ed by Hass in Ha’aretz:

‘It would make sense for Palestinian schools to introduce basic classes in resistance: how to build multiple “tower and stockade” villages in Area C; how to behave when army troops enter your homes; comparing different struggles against colonialism in different countries; how to use a video camera to document the violence of the regime’s representatives; methods to exhaust the military system and its representatives; a weekly day of work in the lands beyond the separation barrier; how to remember identifying details of soldiers who flung you handcuffed to the floor of the jeep, in order to submit a complaint; the rights of detainees and how to insist on them in real time; how to overcome fear of interrogators; and mass efforts to realize the right of movement. Come to think of it, Palestinian adults could also make use of these lessons, perhaps in place of their drills, training in dispersing protests, and practice in spying on Facebook posts.’

Gideon Levy came to her defense, also in Ha’aretz: ‘Rooted deep in the Israeli experience is the idea that what is permitted to the Jewish people is prohibited to others. But there is no need to go back as far as the time of Pharaoh. Ever since then, human history has been paved with freedom struggles against foreign rulers, struggles that earned the respect of history, and that were, in the main, violent, often more violent than the Palestinian struggle. The slogan “We’ve had enough of you, occupiers” is not exclusive to Arabic; it has been voiced down through history in nearly every language, including modern Hebrew.
Hass, like me, is against violence. I take the liberty to write that out of deep conviction. Who wants to see children killed by rocks, citizens torn apart by an improvised explosive device, or teenagers who have been shot? But resistance to violence must be direct, comprehensive and fair. It must include the resistance to the occupier’s violence. There is no need to count the dead and wounded, the physically and mentally disabled − of both nations − to recognize that the greater, and inherent, violence is that of the occupier.
Palestinian rocks and IEDs have caused great losses to both peoples. The only way to end them is to end the occupation. Unfortunately, that will not happen on its own. In 46 years of occupation, Israel has proved it cannot be forced to stop its evil actions through acts of good.
Now we must ask Hass’ detractors: What do you expect? What are you, patriots and supposed opposers of violence, offering the Palestinians? Do you honestly think they will bow their heads in submission and obedience for another 46 years? Is there an historical precedent for such behavior?’

The main question that Amira Hass is raising is: what is effective resistance? Indeed, documenting “violence of the regime’s representatives” is where it all starts. In our times violence against the state has proven seldom effective. From Peru to Palestine, all it did was creating an excuse for the state to become even more violent.
And to avoid misunderstandings, for obvious and less obvious reasons I can identify both with Israeli soldiers and with Palestinian stone throwers, perhaps even better with Israeli soldiers.
But whether it is asylum seekers in the Netherlands or Palestinians in Area C, documenting the abuse is the most obvious and most ethical form of resistance.
Narration is a strategy of obedience, but also a strategy of (ironic) resistance.