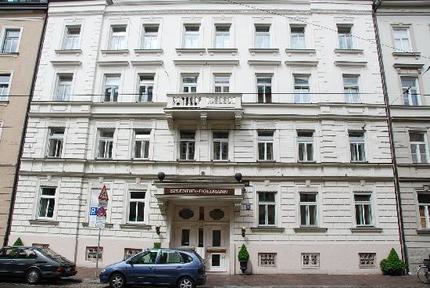 My flight from Munich to Newark was four hours delayed and instead of hanging around at the airport I decided to go back to my cozy hotel in the city center, Splendid-Dollmann, where I’ll be staying for two months this fall.
I sat in the garden, the weather was gorgeous, and after having drunk two bottles of mineral water I asked the charming waiter: “Where’s the men’s room?” He showed me the men’s room, I opened the door and I saw a lady in her forties lying on the floor. I whispered “excuse me” and I closed the door again.
Then I went back to the waiter and I said: “Are you aware of the fact that there is a woman lying on the floor in the men’s room?” “Yes,” he answered, “we are aware of it. We’ve called the emergency number already, the ambulance came, the first responders took a look at her and then they left again.” He made it sound as if this was perfectly normal. The first responders saw a woman lying on the floor in the men's room, she said “forgive me for causing trouble, but this is my hobby, this is something I really like to do on a balmy day like this.” And after this explanation the first responders left again, of course. What else was there for them for to do? Anyhow, this was not my business so I asked the waiter: “Is there another bathroom I can use in the meantime?” “Oh, yes,” he said. “In the breakfast room, one floor down.”