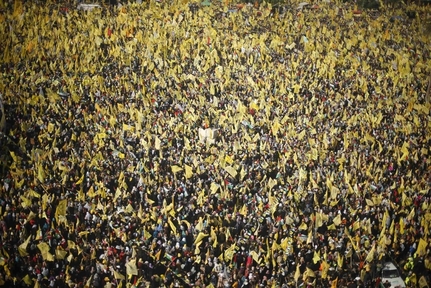 This is an interesting piece by Ian S. Lustick in the Times on the so-called two-state solution that has become a rather dangerous delusion, at least a distraction.

‘For some, abandoning the two-state mirage may feel like the end of the world. But it is not. Israel may no longer exist as the Jewish and democratic vision of its Zionist founders. The Palestine Liberation Organization stalwarts in Ramallah may not strut on the stage of a real Palestinian state. But these lost futures can make others more likely.
THE assumptions necessary to preserve the two-state slogan have blinded us to more likely scenarios. With a status but no role, what remains of the Palestinian Authority will disappear. Israel will face the stark challenge of controlling economic and political activity and all land and water resources from the Jordan River to the Mediterranean Sea. The stage will be set for ruthless oppression, mass mobilization, riots, brutality, terror, Jewish and Arab emigration and rising tides of international condemnation of Israel. And faced with growing outrage, America will no longer be able to offer unconditional support for Israel. Once the illusion of a neat and palatable solution to the conflict disappears, Israeli leaders may then begin to see, as South Africa’s white leaders saw in the late 1980s, that their behavior is producing isolation, emigration and hopelessness.
Fresh thinking could then begin about Israel’s place in a rapidly changing region. There could be generous compensation for lost property. Negotiating with Arabs and Palestinians based on satisfying their key political requirements, rather than on maximizing Israeli prerogatives, might yield more security and legitimacy. Perhaps publicly acknowledging Israeli mistakes and responsibility for the suffering of Palestinians would enable the Arab side to accept less than what it imagines as full justice. And perhaps Israel’s potent but essentially unusable nuclear weapons arsenal could be sacrificed for a verified and strictly enforced W.M.D.-free zone in the Middle East.’

The last option seems to me the most farfetched but everybody is allowed to dream.

‘In such a radically new environment, secular Palestinians in Israel and the West Bank could ally with Tel Aviv’s post-Zionists, non-Jewish Russian-speaking immigrants, foreign workers and global-village Israeli entrepreneurs. Anti-nationalist ultra-Orthodox Jews might find common cause with Muslim traditionalists. Untethered to statist Zionism in a rapidly changing Middle East, Israelis whose families came from Arab countries might find new reasons to think of themselves not as “Eastern,” but as Arab. Masses of downtrodden and exploited Muslim and Arab refugees, in Gaza, the West Bank and in Israel itself could see democracy, not Islam, as the solution for translating what they have (numbers) into what they want (rights and resources). Israeli Jews committed above all to settling throughout the greater Land of Israel may find arrangements based on a confederation, or a regional formula more attractive than narrow Israeli nationalism.’

He is of course right, but I’m afraid that most of the world is not ready yet for these “unpleasant truths”.