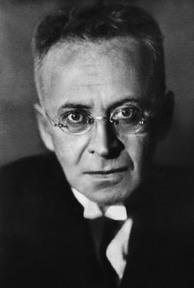 Jonathan Franzen in the Guardian on Karl Kraus, capitalism and Apple, among other things:

‘The thing about Kraus is that he's is very hard to follow on a first reading – deliberately hard. He was the scourge of throwaway journalism, and to his cult-like followers his dense and intricately coded style formed an agreeable barrier to entry; it kept the uninitiated out. Kraus himself remarked of the playwright Hermann Bahr, before attacking him: "If he understands one sentence of the essay, I'll retract the entire thing." If you read Kraus's sentences more than once, you'll find that they have a lot to say to us in our own media-saturated, technology-crazed, apocalypse-haunted historical moment.
Here, for example, is the first paragraph of his essay "Heine and the Consequences".
"Two strains of intellectual vulgarity: defenselessness against content and defenselessness against form. The one experiences only the material side of art. It is of German origin. The other experiences even the rawest of materials artistically. It is of Romance origin. [Romance meaning Romance-language — French or Italian.] To the one, art is an instrument; to the other, life is an ornament. In which hell would the artist prefer to fry? He'd surely still rather live among the Germans. For although they've strapped art into the Procrustean Folding Bed of their commerce, they've also made life sober, and this is a blessing: fantasy thrives, and every man can put his own light in the barren windowframes. Just spare me the pretty ribbons! Spare me this good taste that over there and down there delights the eye and irritates the imagination. Spare me this melody of life that disturbs my own music, which comes into its own only in the roaring of the German workday. Spare me this universal higher level of refinement from which it's so easy to observe that the newspaper seller in Paris has more charm than the Prussian publisher."’

First of all, this translation is a remarkable feat; to translate well is never easy, to translate Kraus well is perhaps beyond human capacity. (One cannot help but suspect that Kraus himself aimed for something higher than human beings.)

(One could ask for example if “intellectual vulgarity” is the best translation of “Unkultur” – it’s rather heavy-handed but I would not have a better solution right now. And what to do with the word "Camelot"?)

Franzen continues: ‘First footnote: Kraus's suspicion of the "melody of life" in France and Italy still has merit. His contention here – that walking down a street in Paris or Rome is an aesthetic experience in itself – is confirmed by the ongoing popularity of France and Italy as vacation destinations and by the "envy me" tone of American Francophiles and Italophiles announcing their travel plans. If you say you're taking a trip to Germany, you'd better be able to explain what specifically you're planning to do there, or else people will wonder why you're not going someplace where life is beautiful. Even now, Germany insists on content over form. If the concept of coolness had existed in Kraus's time, he might have said that Germany is uncool.’

Germany uncool? Seriously? Isn’t Berlin the favorite travel destination of all hipsters? And should we really believe that Germany “insists on content over form”? Isn’t this statement of the same caliber as the old European lament that Americans are superficial?

Franzen again: ‘It's not clear that Kraus's shrill, ex cathedra denunciations were the most effective way to change hearts and minds. But I confess to feeling some version of his disappointment when a novelist who I believe ought to have known better, Salman Rushdie, succumbs to Twitter.’

Of course al those novelists, intellectuals and other representatives of the upper class who are on Twitter felt offended.
One tweeted: “Do you know what's the sign of the apocalypse Mr. Franzen? Your novels being considered what's great and American about literary culture.” Ah well, Jonathan Franzen definitely deserves his fame. But isn’t it a sign of cynicism or at least of feeling superfluous to announce that Twitter is the great enemy?

“I was a late child in a loving family which, although it wasn't nearly prosperous enough to make me a rentier, did have enough money to place me in a good public school district and send me to an excellent college, where I learned to love literature and language. I was a white, male, heterosexual American with good friends and perfect health. And yet, for all my privileges, I became an extremely angry person. Anger descended on me so near in time to when I fell in love with Kraus's writing that the two occurrences are practically indistinguishable.
I wasn't born angry. If anything, I was born the opposite. It may sound like an exaggeration, but I think it's accurate to say that I knew nothing of anger until I was 22. As an adolescent, I'd had my moments of sullenness and rebellion against authority, but, like Kraus, I'd had minimal conflict with my father, and the worst that could be said of me and mother was that we bickered like an old married couple. Real anger, anger as a way of life, was foreign to me until one particular afternoon in April 1982. I was on a deserted train platform in Hanover. I'd come from Munich and was waiting for a train to Berlin, it was a dark grey German day, and I took a handful of German coins out of my pocket and started throwing them on the platform. There was an element of anti-German hostility in this, because I'd recently had a horrible experience with a penny-pinching old German woman and it did me good to imagine other penny-pinching old German women bending down to pick the coins up, as I knew they would, and thereby aggravating their knee and hip pains. The way I hurled the coins, though, was more generally angry. I was angry at the world in a way I'd never been before. The proximate cause of my anger was my failure to have sex with an unbelievably pretty girl in Munich, except that it hadn't actually been a failure, it had been a decision on my part. A few hours later, on the platform in Hanover, I marked my entry into the life that came after that decision by throwing away my coins. Then I boarded a train and went back to Berlin, where I was living on a Fulbright grant, and enrolled in a class on Karl Kraus.”

Anger descends on all of us, but for literature lovers all over the world, for Jonathan Franzen himself probably, for humankind it would have been better if Jonathan Franzen had have had sex with this “unbelievably pretty girl in Munich”.

The good news is: it’s not too late. There are still unbelievable pretty girls in Munich. Perhaps a less angry Jonathan Franzen will do Karl Kraus more justice.