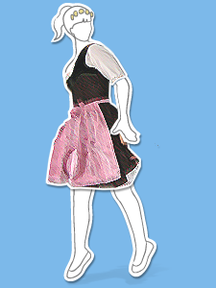 The CSU election party in the Lazarettstrasse in Munich was a bit dull. (No Weisswurst.)
Relaxed security, that’s for sure. American security guards could learn something from these friendly guys at the gate.
The party itself: proud Bavarians, a few attractive girls in dirndl skirts and some men in lederhosen (leather breaches). I must admit that I learned to love lederhosen. And at this point in my life I would like to start a movement: Jews in Lederhosen (it could be a musical as well.) So if you are Jewish and you love lederhosen, contact me. Women in lederhosen can be a medicine against melancholia. Depressed? First try the lederhosen.
(I have to admit that I mistakenly predicted that the Free Democrats would make it past the five percent hurdle. Not that I like the FDP so much, as I said a few days earlier, but I counted, and many pollsters did the same, on old-fashioned conservatism of the German electorate. The good thing is that the AfD didn’t make it past the hurdle either. The AfD proves that education can have terrible side effects.)