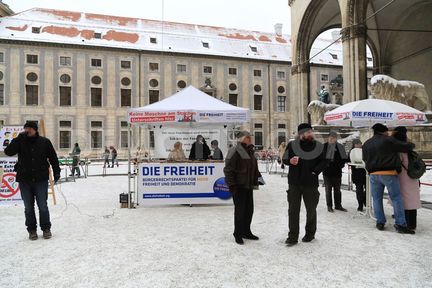 This afternoon I had a cup of coffee with Michael Stürzenberger, a journalist, politician and former spokesman for the CSU in Munich. He is the chairman of the small, Islamophobic political party Die Freiheit “The Freedom” – clearly modeled after Geert Wilders’ political party in the Netherlands. Stürzenberger’s party may gain a seat in the city counsil of Munich by the municipal elections next spring – there’s no 5% hurdle on municipal level.
Stürzenberger is in favor of an “edited version” of the Koran (if not the Koran should be outlawed), furthermore the Islam should be radically modernized; among other things the worship of the Prophet Mohammed should be banned. Interestingly enough some Alawites in Munich support this idea, Stürzenberger claimed.
One of his projects right now is to prevent the building of a “Center for Islam in Europe” in Munich, but his main objective as we know from Geert Wilders is to destroy -- or at least to prevent the further rise of -- "a dangerous ideology". Stürzenberger's distinction between the "foreigner" and his so-called "ideology" is not always clear.
The Bavarian Office for the Protection of the Constitution, the domestic intelligence agency of Bavaria, put Stürzenberger and his party officially under surveillance.
Upon my question if he was bothered by this surveillance Stürzenberger answered: “I have nothing to hide, let them listen to my phone calls. I say the same things on the phone as I’m saying to you right now.”