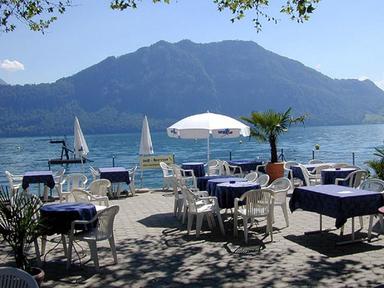 Somewhere in the summer of 2003 I went to the village of Vitznau for a short vacation.
I happened to have a skin infection. But I don’t like to go to the doctor, so I kept walking around with the skin infection. A good friend of mine, who was vacationing with me, said: “This can’t go on, let’s go to a doctor.”
There was no doctor in Vitznau, but there was one in Weggis. We took the boat to Weggis, the doctor was very kind; he prescribed an ointment. He said: “You are not going to die, at least not now.”
Despite this ointment I had to see a skin doctor in New York a few weeks later.
This skin doctor said: “Use disposable razors.”
And that’s what I’ve been doing since the fall of 2003.
Now I’m back in Weggis. I haven’t made it to Vitznau yet, but the doctor of Weggis visited me in a dream. Once again he said: “You are not going to die, at least not now.”