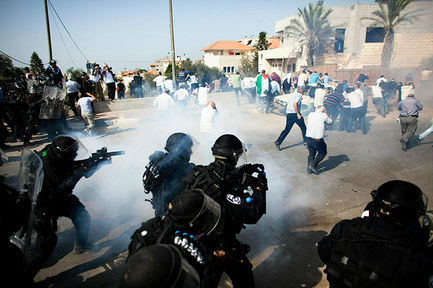 This article by Anshel Pfeffer in Ha’aretz on the killing of Mohammed Abu Khdeir is worth reading:

“In the three-and-a half days that passed between the murder of Mohammed Abu Khdeir and the Shin Bet's official acknowledgement that the six suspects arrested were likely “Jewish extremists,” the conversations, chance encounters and social media discourse within the Israeli public reflected denial.
The conversations evolved from “I can’t believe Jews did it, it must be some kind of honor killing in the family,” to “please tell me it wasn’t Jews that did it” and finally “those murderers were not acting like Jews, we are not like that.” Denial, upon denial, upon denial.
How far do we have to go back? To the yet unsolved killings of Nadeem Nuwara and Mohammed Abu Daher in Bitounia, hit directly by live fire during a Nakba Day demonstration two months ago - to give just one recent example of a case in which Palestinian teenagers were targeted?”

“Even those of us who sincerely believe we are not racist in any way have been conditioned by a situation in which Jews are masters over another nation. Ending the occupation may not bring peace with our neighbors and it won’t remove racism from our society. Xenophobia exists everywhere and is an unavoidable human condition, but we can build up our intolerance of it. Ending our control over the Palestinians’ lives will allow Israelis to start cleaning out this rot that has been corrupting us for so long.
It’s not necessarily the settlers who are at fault. There is no reason to believe that the majority of Israelis living in the West Bank are capable of cold-blooded murder or even approved of it in any way. The “price tag” hate criminals are also a minority in the settlements - many of them are not even settlers. Most if not all of the six suspects live within the Green Line; Rabin’s assassin Yigal Amir was a resident of Herzliya, the comfortable middle-class town which until recently had a mayor who was a member of the left-leaning Meretz party.”

“This newspaper and the small but valiant community in Israel that continues to insist on having a discussion about human rights, in not closing our eyes to the injustices carried out in our name, in believing in an Israel and in a Zionism that can flourish untainted by racism and hate crimes, rather than continuously having to delude itself, are daily accused of being self-hating defeatists for telling the ugly truth. Now those who criticize us are waking up to reality for a few brief moments — but already are putting themselves back to sleep with the soporific talk of Jewish values and how much more ruthless the other side is.”

There’s not much to add to this. Whether it’s in Yugoslavia, India, Iraq or Israel and Palestine ethnic conflicts and the killings that are the result of these conflicts are never spontaneous. They are created by religious and political leaders and their bloodthirsty followers. Collective punishment is a tool to generate even more ethnic hatred.

Unfortunately, many people prefer obvious delusions to the “ugly truth” but there is hope, albeit small. Pfeffer’s article is proof of it.