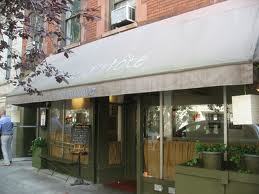 The waiter at Table d’Hôte on 92nd Street was clearly overwhelmed. He was the only waiter and there were just too many people in the restaurant for lunchtime. Then a woman came in and she wanted to change he reservation for that evening.
“Don’t do it,” he said while he showed her the list of reservations. “I have these four people coming in at six and they won’t leave before eight. Do you know what it means?”
She clearly didn’t know what it meant.
“As an experienced waiter I can tell you that when four people are coming in for dinner they will stay for at least two hours. So come at eight. That’s the best time for you and your people.”
“I’m not sure if we can wait so long,” the woman replied.
I saw the waiter sweating. “Don’t do it,” he said, “don’t get yourself in trouble.”
Somehow it was clear that he was in trouble, but the woman didn’t want to push her luck. “I won’t change the reservation,” she said.
The waiter ran to the kitchen – a hapless man but clearly a professional.