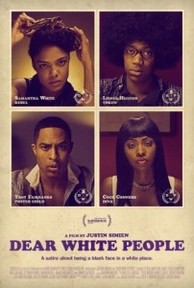 The New York Times urged us to see Justin Simien’s “Dear White People” and so I did. Without any regret, the movie was unlike anything else I had seen before.
A Swiss friend with whom I had seen the movie said afterwards: “I didn’t get everything, I feel that this is all very strange to me. I missed many things.”
And I have to admit that having not gone to college in the US made me miss out on a few jokes. A group of young Asian-American women seated next to me laughed considerably more often and louder.
In the taxi my Swiss friend asked: “Is the director suggesting that racism is a construction that without the media would barely exist?”
“He is ambiguous,” I said hesitantly.
I thought of the Black Pete discussion that is still raging in the Netherlands.
Richard Brody wrote in The New Yorker: “The film narrows its characters to walking Post-Its of issues, even while, for the most part—thanks to the exertions of the fine cast—they come off as individuals, yet ones whose depth of experience is systematically kept out of the movie. The subjectivity of Simien’s film is limited; there are no, so to speak, free radicals in its characters’ consciousness. Simien’s approach to his story and his characters reproduces precisely the state of media that his character Sam, a student filmmaker, decries—it flattens the individuality and the idiosyncrasy of the people in the movie and renders them representative.” (Read the review here.)

I guess that’s what this movie underlines, our identity is much more a cultural construction than we are willing to admit. Individuality is most often an illusion, for many an unwanted illusion.
We reduce people to stereotypes and we are being reduced to stereotypes; this reduction process appears to be unavoidable, some people take even pleasure in it. To turn the unavoidable in a source of pleasure can be a wise strategy indeed.
Identity is living up to other people’s prejudices; social interaction is playing with other people's prejudices.
A Jew can convert, a gay can hide his sexual preferences, (the results of these disguises may differ from person to person and from time to time, at least it’s an option) but how do you assimilate into the mainstream when you cannot hide or camouflage your vulnerabilities?