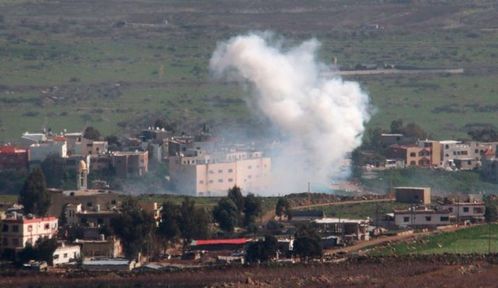 Are we heading for a new Lebanon war? According to Amos Harel the answer is no.

“Even if Prime Minister Benjamin Netanyahu wants to show how firm he is on security ahead of the election, all-out war with Hezbollah is another thing entirely. It is hard to see why Netanyahu would think a broad military conflict would necessarily end in a persuasive victory that would bolster his position.
Thus it seems that the prime minister has a clear interest in ending this round of violence soon. As always, rhetoric must be distinguished from actions. Over the years, Israel and Lebanon have figured out ways to signal their true intentions. If Netanyahu threatens to pulverize Hezbollah, but the Israel Air Force makes do with bombarding a few empty, rocky hills in southern Lebanon, they will know in Lebanon that Israel wants to end this round.
To judge from Hezbollah’s moves so far — rocket fire on the Golan on Tuesday and Wednesday’s attack on an Israeli military vehicle — it, too is seeking a controlled conflict. The question mark over the coming weeks has to do with how Hezbollah leader Hassan Nasrallah regards the death of Mughniyeh, who has special standing in Hezbollah thanks to his father, slain Hezbollah military leader Imad Mughniyeh.”

The problem of course is that it is very hard to control a conflict after you started it. But it is also true that most parties are more than willing to settle for controlled conflicts, almost nobody wants an all-out war. But sometimes it happens, against the wishes of all parties involved.