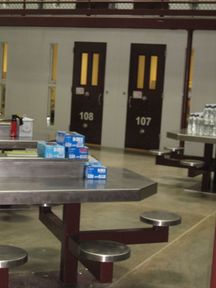 An interesting article on the op-ed page of the New York Times about Gitmo.
Not completely in line with my experiences over there, but the author asks a fair question, well not really a question: “Even the most vocal critics say they do not want to set terrorists free, but they scorn Guantánamo Bay and military commissions and demand alternatives. The facts show the current alternative is worth keeping.” As I have stated before Gitmo is not the exception, conditions in many prisons in the US and elsewhere are not what we call human. Okay, prisoners there had a fair trial, or a slightly diluted version of it. And yes many prisoners in Gitmo are probably innocent, many prisoners all over the world are probably innocent. But closing Gitmo is not more than a cosmetic operation I'm afraid. And the question remains, what are we going to do with those who we can deem dangerous by reasonable standards? ((The Fifth Amendment to the United States Constitution: :No person shall be ... deprived of life, liberty, or property, without due process of law” What’s due process in this case?)