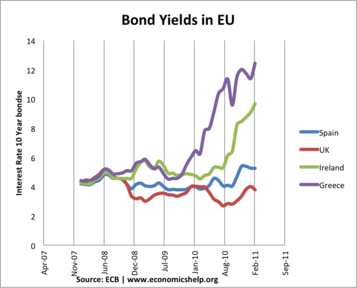 A very interesting interview with Thomas Piketty in Der Spiegel:

“SPIEGEL: What do you propose?
Piketty: We need to invest more money in training our young people, and in innovation and research. That should be the most important goal of an initiative to promote European growth. It isn't normal that 90 percent of the world's top universities are in the United States and our best minds go overseas. The Americans invest 3 percent of their GDP in their universities, while it's more like 1 percent here. That's the main reason why America is growing so much faster than Europe.
SPIEGEL: The United States has a uniform fiscal policy. What conclusions can be drawn from that?
Piketty: We need a fiscal union and a harmonization of budgets. We need a common debt repayment fund for the euro zone, like the one proposed by the German Council of Economic Experts, for example. Each country would remain responsible for repaying its portion of the total debt. In other words, the Germans would not have to pay off the Italians' old debts, and vice-versa. But there would be a common interest rate for euro bonds, which would be used to refinance the debt.
SPIEGEL: But that would create the risk of a big debt coalition. Who determines how much debt is allowed?
Piketty: We need a communitization of debts, but it has to be democratically legitimized. I propose a European parliament for the euro zone that would consist of members of the national parliaments. Each country would be represented in this parliament in proportion to its population size. In other words, Germany, with its 80 million inhabitants, would have the largest number of members.”

“SPIEGEL: At this point, voters don't seem overly keen to shift more power to Brussels. On the contrary, EU-skeptic parties are becoming popular everywhere.
Piketty: No matter what you think of Syriza's election victory, it could serve as a shock therapy of sorts for those in power. Suddenly they'll realize that what they've been doing isn't working, and that they have to take a different approach. But a leftist party like Syriza or Spain's Podemos isn't nearly as dangerous as the extreme right. The National Front here in France is more popular than ever at the moment. That's why it's so dangerous for the established parties to continue fueling these nationalists. Constantly berating the lazy Greeks or Portuguese is irresponsible.”

So even Mr. Piketty, who is highly critical of the euro and the EU, proposes more Europe as the only medicine that may work.

And extra money for universities – interesting, I’m afraid that most voters in times of loathing, fear, ISIS and the war on terror are more willing to give money to defense and variations on Departments of Homeland Security than to pay for higher education. So I’m not sure if we need more democracy, perhaps we need a bit less.