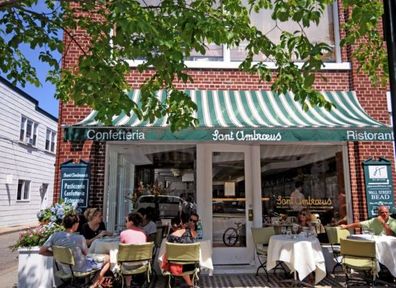 Sant Ambroeus is my favorite restaurant in NYC. Love is a strange thing, and the lover is also a creature of habits; Sant Ambroeus is not the best, neither the cheapest, nor the coolest Italian restaurant in the city but I love it. Perhaps this is also because my former German publisher Daniel Keel and his wife Anna introduced me to Sant Ambroeus somewhere in the 90s. And many of my adventures started or ended in Sant Ambroeus.
But there is also a Sant Ambroeus in Southampton and the maître d’ who works in the winter in Sant Ambroeus on Madison Avenue moves in the summer to Southampton. Many times already she had said to me: “Come and visit me in Southampton.”
This evening I took a taxi from Montauk to Southampton.
The maître d’ greeted me as a lost son.
The food in in Southampton was better than in the city, the outdoor café was extremely pleasant. Next to us an elderly man was dining with his younger wife and his three daughters. It was a perfect evening, Greece was far away, I contemplated ordering a limoncello but I decided against it.