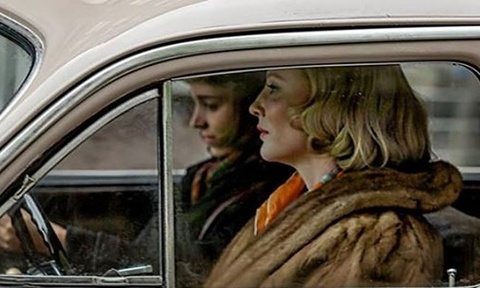 “Among the virtues of Todd Haynes’s new film, Carol, is the delicacy, the patience, and the sheer amount of screen time that it lavishes on the experience of falling in love: the hesitations and doubts, the seemingly casual exchanges freighted with meaning and suppressed emotion, the simple happiness of being together. In so many films, especially Hollywood films, love either sets the plot in motion (Bonnie and Clyde meet and rob banks) or provides the punch line: after ignoring the obvious for two hours, the contentious pair finally embrace just as the credits roll.
But in Carol, which tells the story of how Carol, a wealthy married woman, meets and then falls in love with a younger woman in 1950s Manhattan, love is the plot. The narrative takes its time, inching its lovers toward a mutual recognition of the passion that thrums beneath the surface without fully declaring itself until late in the film.”

I appreciated “Carol” (see here) but I’m less convinced than Francine Prose whether there is much “simple happiness” between Carol and Therese.

The stories we tell each other about love, just think of novels, movies or plays, are always about the obstacles between the lovers. “Carol” is not an exception. What’s obviously missing is the male aggression that often passes for seduction.

The last scene in “Carol” is romantic, but think of the last scene in “The Graduate” – where the obstacles disappear the movie has to end. And whether there’s much hope for love without the obstacles remains to be seen.
At least in the movie, there is not much proof that Therese and Carol are really interested in who the other person is. But to be smitten with another is not so much a matter of genuine interest in the other, it’s about idealization of the love object.