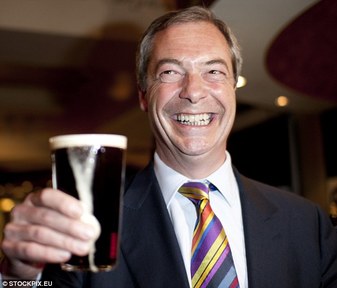 'Mr. Farage — brash, outspoken, loquacious and divisive, a commodities broker turned politician who loves widely striped suits and large glasses of beer — was probably not the man to lead the new party beyond its current limits. In a recent interview with the Financial Times over lunch, he consumed three pints of beer, half a bottle of wine and a glass of port.'

'Despite his innate English nationalism, Mr. Farage always seemed at home in Brussels, where he would frequent the bars of Place du Luxembourg, or in Strasbourg, France, the home of the European Parliament, where UKIP held regular, alcohol-fueled dinners in what was known as the “gadfly club.”

Mr. Farage employed his German-born second wife, Kirsten Mehr, as his assistant, and has acknowledged expense and allowance claims of some 2 million pounds, in the neighborhood of $3 million, since his election to the Parliament.

None of which prevented him from pummeling the institutions or its representatives, most notably the former president of the European Council, Herman Van Rompuy, whose appointment he greeted with the sort of polemic seldom heard in the rarefied debates of the European Parliament.

In what was to become a YouTube hit, Mr. Farage told Mr. Van Rompuy to his face in 2010 that he had “the charisma of a damp rag and the appearance of a low-grade bank clerk.”'

The pose of the outsider, the attitude of being anti-establishment while belonging very much to the establishment is what unites the populists, from Trump to Le Pen, from Farage to Wilders.