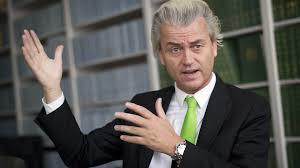 Der Spiegel featured an interview conducted by Claus Hecking with Paul Wilders, the brother of the Dutch Islamophobe:

"SPIEGEL: And yet he is surprisingly popular among the Dutch.

Wilders: He is a master of short messages. And in this complex age, that is precisely what many people want: a simple political vision without any nuance. Geert gives them that. He creates an identity: We, the Dutch people. And he also creates opposite poles: Muslims, the European Union, the elites. Terrorist attacks, refugees and the euro crisis engender fear and dissatisfaction. My brother, French populist Marine Le Pen and others take advantage of this mood and offer seemingly simple solutions: out with the migrants, close the borders, exit the EU. But our problems are far more complex. Geert peddles illusions to people.

SPIEGEL: What do you mean?

Wilders: For instance, in his campaign platform he pledges to close the mosques and ban the Koran. How is this supposed to work, from a practical standpoint? It violates our constitution, which means it would have to be approved by both chambers of parliament with a large majority. Given our political landscape, with its many parties, he'll never succeed. To become prime minister, Geert would need several coalition partners, or he would need the support of several parties in a minority government. He would have to make compromises and break campaign promises.

SPIEGEL: Does your brother really believe what he preaches, or is it all just show?

Wilders: He is a staunch opponent of Islam. But there is, of course, plenty of strategy and thirst for power in the mix."

"SPIEGEL: Does your brother really believe what he preaches, or is it all just show?

Wilders: He is a staunch opponent of Islam. But there is, of course, plenty of strategy and thirst for power in the mix. Geert doesn't have much left in life besides politics. His fortunes hinge on his political success.

Wilders: He was a horrible pest, egocentric and aggressive.

SPIEGEL: What did he do?

Wilders: I don't want to reveal any private details, but he was already extreme at the time, even for an adolescent. He has tunnel vision, and he doesn't believe in compromise. You know, my mother lives for her children, and she loves us deeply. But Geert's behavior toward her and my father was so appalling that they seriously threatened to throw him out of the house one day. My brother improved after that. After finishing school, he went to Israel, where he worked in a settlement and became an adult."

"SPIEGEL: Do you even love your brother anymore?

Wilders: Of course. Politically I disagree with him completely. But he is my brother. I believe he is unhappy. That makes me unhappy, too."

The other thing that struck me is his apparent unhappiness. According to Geert Wilders politics is hate-mongering and hate-mongering is in the end just self-medication.