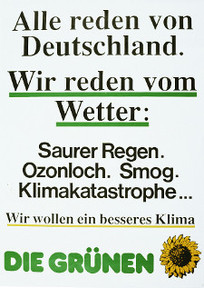 Der Spiegel (Annett Meiritz) on the Green Party in Germany:

"After Sunday's outcome in North Rhine-Westphalia, Özdemir spoke of the need for the party to sharpen its profile and for a new beginning. The party is now considering what that might look like. It's possible the Green Party might place a greater emphasis on two of its political stars -- Winfried Kretschmann, the governor of the state of Baden-Württemberg, and Robert Habeck, who is lieutenant governor of Schleswig-Holstein -- and focus more on its door-to-door campaign.

Only a year ago, the party had been dreaming of a double-digit outcome in this year's national election, but now the focus has shifted to disaster prevention. If all goes well, so goes the calculation, the party could perhaps escape the opposition as part of a three-party coalition government at the national level. That is the best-case scenario. After the election in North Rhine-Westphalia, though, it has become much less likely."

I would say that the difference between Merkel's CDU and the Green Party is for the average German voter almost non-existent.