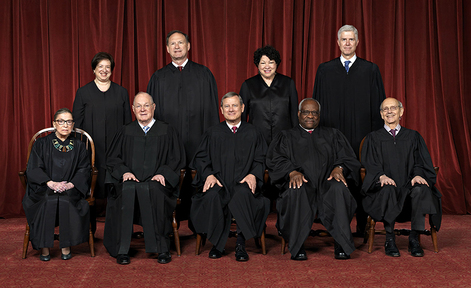 Chemi Shalev in Ha'aretz on the Supreme Court ruling:

'The 5-4 decision by the Court’s conservative majority underscores how far the United States has evolved since Trump’s December 2015 election campaign call for a “shutdown of Muslims entering the United States until our country’s representatives can figure out what the hell is going on.” Back then, the reaction was overwhelming revulsion, which encompassed most Republican presidential candidates as well as world leaders, including, hard to believe now, Prime Minister Netanyahu. Two and a half years later, Trump’s racially-tinged edicts have been whitewashed by the Supreme Court as Republicans are lauding its decision as a confirmation of presidential authority. In the eyes of the so-called enlightened world, America is receding into darkness.

Chief Justice John Roberts and his conservative colleagues Samuel Alito, Clarence Thomas, Anthony Kennedy and Neil Gorsuch preferred to ignore the religiously prejudiced origins of the Trump ban and to focus on the modified executive orders and presidential proclamations that sought to render it palatable to the judicial system. They buried their heads in the letter of Trump’s edicts, rather than dwell on their spirit and intent. But no matter how many fine points are made to differentiate between Trump’s original blanket ban and the restrictions now placed on immigration from eight countries, six of which are Muslim, the odious bottom line remains the same: A thinly disguised populist appeal to the baser instincts of Muslim-fearing Americans has now become the law of the land.

The decision sends a wake-up call to liberal America: Your institutions won’t save you. They are all ideologically corruptible. A Supreme Court that is made up of political appointees, that was “saved” from a liberal majority by an unscrupulous Majority Leader Mitch McConnell, who shamelessly blocked the appointment of Obama appointee Merrick Garland for over a year, cannot be relied on to uphold liberal values or interpret the Constitution in their light. It is a safeguard built on shifting sands, as it has been throughout American history, from sanctioning slavery and racial segregation to ensuring freedom of speech and a woman’s right over her body.'

'In the end, only American voters can stop Trump in his tracks. Only the voters can prevent the United States from slowly but surely evolving into Trumpistan. The crunch time will come in the Congressional elections in November, which could yield a Democratic takeover of the House of Representatives. Voters, however, are notoriously unreliable, as any peace-loving, democracy-cherishing Israeli leftist can tell you.
Democrats would be wrong to underestimate the enduring appeal of ethnocentric nationalism and the persistent power of incitement against foreigners and minorities. Both have made Netanyahu into Israel’s longest serving prime minister and kept the right wing in power for most of the past 40 years. If Trump isn’t stopped soon, Trumpism could rule for decades, aided and abetted by the highest court in the country.'

The appeal of ethnocentric nationalism is rather strong, and as Mr. Shalev rightly points out: the Israeli example doesn't give too much hope.