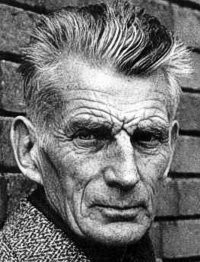 The NYT editorial on Beckett and the Supreme Court:

"What Americans can’t know about Judge Kavanaugh: pretty much anything else. That’s thanks to the perversion of the Supreme Court confirmation process, which once provided the Senate and the public with useful information about a potential justice’s views on the Constitution, but which has, ever since the bitter battle over President Ronald Reagan’s failed nomination of Robert Bork in 1987, devolved into a second-rate Samuel Beckett play starring an earnest legal scholar who sits for days at a microphone and labors to sound thoughtful while saying almost nothing.'

Third-rate I would say.

On the other hand, wouldn't it be great if more politicians were trying to sound thoughtful while saying almost nothing? The emphasis is on "almost." I'm not a cynic.