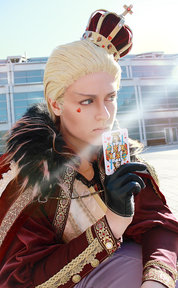 Now something about the King of Germany - Tobias Buck in FT:

'Peter Fitzek rules over a kingdom, and he has the passport to prove it.

Bound in white, the passport gives Mr Fitzek’s name only as Peter I. His title is boldly stated: “King of Germany”. The issuing authority is the Kingdom of Germany, a pseudo-state founded by Mr Fitzek in 2012 that claims to have more than 250 citizens.

The kingdom is near the eastern German city of Wittenberg, and covers only a hectare. Mr Fitzek insists it meets all the criteria of an independent country, and that neither Germany’s law nor government hold sway within its borders. The kingdom has a flag and crest, a constitution and bank, a separate health insurance and pension system, and even a currency: the E-Mark.'

'Political analysts argue that the movement, whose members are usually referred to as Reichsbürger (citizens of the Reich) or Selbstverwalter (self-administrators), is a symptom of the same political malaise that has fuelled the rise of the Alternative for Germany (AfD), the far-right party that won 13 per cent of the vote at last year’s general election.

“What you see is a deeply-rooted dissatisfaction that becomes so radical that people want to drop out of the federal republic altogether,” said Dirk Wilking, a researcher at the Demos Institute in Potsdam and author of a recent book about the Reichsbürger.

A recent report from Germany’s office for the protection of the constitution (BfV), the domestic intelligence agency, estimated that the scene has 16,500 members, a notable increase from recent years, with some 900 classified as far-right extremists.'

Mistrust can propel extreme parties into parliament, but it can also drive citizens out of the state or at least into the periphery of grandiose, self-aggrandizing fantasies.
Unfortunately, from time to time these fantasies become reality.