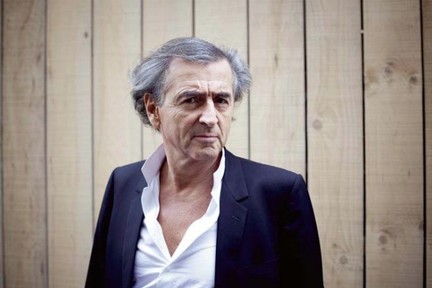 Michael Schulman on Bernard-Henri Lévy in The New Yorker:

'There has always been a strong touch of theatre to Bernard-Henri Lévy. Known as B.H.L., the French philosopher, public intellectual, timber-fortune scion, style icon (he is the patron saint of the unbuttoned collar), and occasional punching bag (Garrison Keillor once called him “a French writer with a spatter-paint prose style and the grandiosity of a college sophomore”) is a walking, pontificating spectacle. So perhaps it was inevitable that he would take to the footlights. On Monday night, he makes his Off Broadway début, at the Public Theatre, in a one-night-only performance of a solo play called “Looking for Europe.”

“The pitch is the following,” Lévy said, by phone, from Paris the other day. “It’s a writer, a French writer, who is supposed to deliver the opening speech of a big conference organized by a group of American Democrats in Sarajevo. And this conference is about Europe: the decomposition, the collapse, and the future of Europe.” The writer, played by Lévy, spends the play’s hour and forty-five minutes in his hotel room, trying to write his speech. (The script, he noted, follows the three Aristotelian unities, beloved by Corneille and Racine: of time, of place, and of action.) “The story of the play is the story of the dead ends, the resumings, the reasserts, the false tracks, the false good ideas, whatever, that he’s trying in order to prepare this speech about Europe, about America, about the world as it is today.”

Why a piece of theatre, as opposed to an essay or a speech? Lévy explained, “A lot of things happen between the four walls of this hotel room, between the writer and himself, between the present and the past, between what he is supposed to deliver in one hour and events of his past life. The play is, in other words, a stream of consciousness.” It’s also a window into what life as a “rock-star philosopher” might be like. “He’s supposed to prepare this serious speech, but every five minutes he is disturbed by parasite thoughts, by souvenirs, and also by external interference. His phone rings constantly, e-mails arrive—from Paris, from New York, from outside the hotel—people who are urging him to hurry. His hosts tell him, ‘We are waiting for you! What the hell are you doing?’ And so on.”'

'On the eve of Trump’s Inauguration, Lévy wrote an Op-Ed in the Times titled “Jews, Be Wary of Trump.” (He spent Inauguration Day, he recalled, with Philip Roth, who shared his worries.) “I don’t know if Trump himself is anti-Semitic or not. I don’t care, to be honest,” Lévy said. But he observed that “millions of little genies” had come out of their bottles. “Something happened in Trump. You cannot say ‘America First’ with impunity. You cannot say, in Charlottesville, that the two camps have equal responsibility with impunity. You cannot hesitate before refusing the congratulations of David Duke with impunity. The American people hear all of that. They listen to that. And this has an effect on the American society,” Lévy said.'