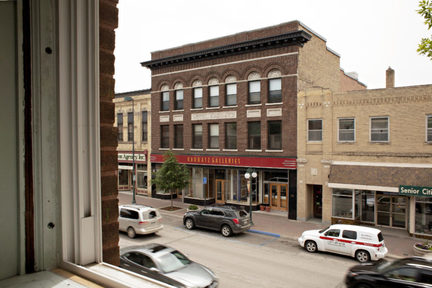 I arrived in Fergus Falls on Thursday, the day after DER SPIEGEL went public with internal revelations about Relotius' journalistic fraud. I'm here to describe the city as it really is, to process what has happened, but also to better understand what Relotius did during the time he spent here.

The fairy tale begins right at the beginning when the author writes that the bus to Fergus Falls rolls toward a dark forest that looks like "dragons could be living in it." I looked for that forest. It doesn't exist, even though there are trees in and around Fergus Falls and small forests here and there.

You get overcome by strange feelings when you travel to hunt down the fabrications of an ex-colleague, but it's even weirder when you try to compare reality with the fake images that his story ingrained in your head. You meet people who resemble Relotius' figures, but the longer you talk to them, the greater the distance grows between those depictions and the reality.

In some cases, the names that were used in the fabricated story are the same as a person in the town, like Maria Rodriguez ("a mother and restaurant owner from Mexico") and the city administrator. But in others, they are fake, as with "Neil Becker" ("a worker who had shoveled coal all his life and, one day, no longer understood his party, the Democrats") or "Israel Rodriguez" (the alleged son of Maria). Ultimately, you come to the realization that there is no actual connection between the real people and the characters described in the article.

According to Relotius' portrayal, "Neil Becker," a Trump voter, was a hard-working coal shoveler at the local power plant who had spent his working life attending to a conveyor belt and was reluctant to travel. Douglas Becker, on the other hand, the real Becker whose photo was featured in the article, ran a gym on Lincoln Avenue for 34 years and is familiar with almost every airport in the United States. He delivers packages for UPS. He also sells used records on the side.

He laughs when I ask him if he's angry. We're eating pizza at a restaurant on Union Avenue that belongs to the mayor. "I first thought the article was a piece of satire," says Becker. "I don't feel offended at all." He says he thought the writer was friendly -- and he still does today. A nice guy. Becker says he's worried about him.

Then he talks about the marathons he has ran -- Los Angeles, Seattle, Chicago -- through half of America. He says he actually did vote for Trump because he wanted a man in Washington who "shakes things up a bit."

To the extent that events can be reconstructed, Relotius lived on the outskirts of the town for 38 days from mid-January to the end of February 2017. He had five weeks to report his feature. That's an eternity in journalism, and most reporters can only dream of the luxury of getting that much time to spend on a story. At one point, I wonder why he invented "Neil Becker" when Douglas Becker is actually far more interesting than the cliché of a coal-shoveling Trump supporter.

Yes reality is often more interesting than clichés invented by journalists or not so talented authors.

But the problem is also that editors, journalists, managers assume, and sometimes they are right, that the general audience loves these clichés.

All those attempts to understand the Trump-voter, or the AfD-voter, or Marine Le Pen-voter, more often than not are just a bunch of clichés, not invented cliches but still, clichés.

The most scary thing of course would be that the Trump-voter turns out to be just like me and you. The otherness of the other is a collection of myths.