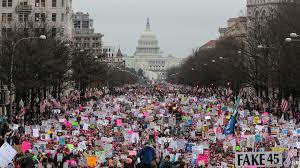 On anti-Semitism, idealism and competitive victimhood - Farah Stockman in NYT:

'Now Women’s March activists are grappling with how they treat Jews — and whether they should be counted as privileged white Americans or “marginalized” minorities, especially in the aftermath of the October mass shooting in Pittsburgh, when 11 people were gunned down at their synagogue.

Tensions around identity have swirled around the Women’s March from its earliest days. Black and Latina women complained on Facebook that white women were planning a march without their input, and that mainstream feminists had long ignored their needs.

Ms. Wruble, a central organizer of the march, says she agrees that white women, including Jews, should grapple with their racial privilege. She put out a call for women of color to join the planning team and was connected with Ms. Mallory and Ms. Perez. At that first meeting, Ms. Wruble said, they seemed to want to educate her about a dark side of Jewish history, and told her that Jewish people played a large role in the slave trade and the prison industry.'

'Ms. Mallory and Ms. Perez began berating Ms. Wruble, according to Evvie Harmon, a white woman who helped organize the march, and who attended the meeting at Ms. Mallory’s apartment complex.

“They were talking about, ‘You people this,’ and ‘You people that’ and the kicker was, ‘You people hold all the wealth.’ I was like, ‘Oh my God, they are talking about her being Jewish,’” said Ms. Harmon, whose account was first published by Tablet. “The greatest regret of my life was not standing up and saying ‘This is wrong.’”

Ms. Mallory denied that she disparaged Ms. Wruble’s Jewish heritage in that meeting, but acknowledged telling white women there that she did not trust them.

“They are not trustworthy,” she said, adding that Ms. Wruble gossiped behind the backs of the other march leaders instead of confronting them when she had an issue. “Every single one of us has heard things that offended us. We still do the work.”

Shortly after that meeting, Ms. Mallory, Ms. Perez and Ms. Sarsour decided they did not want to work with Ms. Wruble anymore.

On her way out, Ms. Wruble texted a senior adviser to the organization with a warning: “The one thing I would suggest you discuss with them is the anti-Semitic piece of this,” she wrote. “Their rhetoric around this stuff will hurt the movement.”'

If the choice is between "marginalized minorities" or "privileged white Americans" count me out I would say.

The obvious doesn't need to be repeated, antisemitism exists on the left, also within the anti-racism movement. But more interesting is the narrow-mindedness with which some activists and idealists see the world: you are either member of a marginalized minority or you belong to the privileged oppressors. It's George W. allover again but with a slightly different emphasis, you are either for us or against us.

It's fairly simple: don't tell other people who they are. Much evil starts with wrong and obstinate assumptions about other people's identity. Real individualism (not the be confused with egoism) is not the problem, it's the solution.