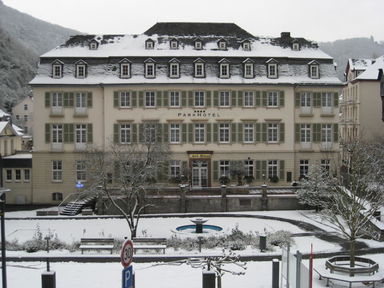 The Parkhotel in Bad Bertrich is very much Fawlty Towers in the Eifel.
On Christmas we were told that we could get a table in the restaurant around 8:30 p.m.
But around 8:30p.m. the waitress told us: "If I were you I would go the pizzeria. We won't be able to serve you any food in the next two hours."
The pizzeria in Bad Bertrich appeared to be closed. All other restaurants were closed as well.
So we went back to the hotel and we informed the waitress about our unsuccessful quest for food.
"Damned," she replied. "We won't send you to your room without food, but it's schnitzel or nothing."
"Well," I said, "is there perhaps still a bit of fish in the kitchen?'
"Salmon," she said. "Salmon or schnitzel."
"Thank you," I said, "thank you for your kindness."