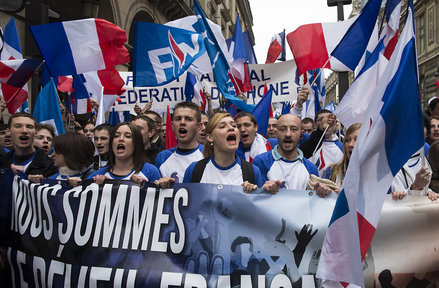 On how to write and to think about the radical right, an exchange between Mark Lilla and James McAuley and Greil Marcus.

'“Marion is not her grandfather,” Lilla writes, referring to the founder of the Front National and notorious Holocaust denier Jean-Marie Le Pen. But what evidence does he have for that claim? When I met her for the first time, I asked Maréchal about her grandfather. This was her response: “I am the political heir of Jean-Marie Le Pen. At the Front National, we are all his heirs. He was a visionary.” Although she has nominally condemned anti-Semitism, she ultimately had this to say about his infamous 1988 remark, repeated many times since, about the Nazi gas chambers being a mere “detail” in the history of the Second World War: “I do not think he meant to harm anyone by saying that,” she told me.

I agree with Lilla that we should absolutely be paying attention to what is happening in these circles, but we must also be more honest about what, exactly, we are witnessing.'

'That sentiment is so common on the left, and not only in France, and so fruitless for confronting the contemporary right, in all its manifestations, that I’m moved to respond, though this was not my original subject. The forces McAuley lists are real enough in our societies. But it is foolish to deny or minimize social realities that xenophobes exaggerate and exploit, in the vain hope of cutting off their oxygen. Equally foolish is an unwillingness to take up fundamental political questions that the xenophobes give bad answers to, and to try giving better ones—questions like Ernst Renan’s “What is a nation?” These avoidance instincts must be resisted. If there is anything we’ve learned in recent decades, it is that closing our eyes or establishing taboos on what can and can’t be discussed, or how, always backfire. The left needs to present people with a fuller reality than the right presents, not an equally restricted one.

For example, illegal immigration in France has indeed dropped since 2015—but the levels before then were already fueling anger and frustration, since neither the French state nor the EU had been able to master them. And unless one believes in open borders, citizens are perfectly right to expect that whatever level of legal immigration has been democratically decided will be enforced. If not, the democratic system itself will look illegitimate. Uncontrolled immigration, along with economic globalization, are the major factors behind the growing distrust plaguing liberal democracies. It is not just bigotry.'

'For those concerned about the antiliberal forces gaining strength in world politics, the most important thing is to maintain one’s sangfroid. Before we judge we must be sure of what exactly we are judging. We need to take ideas seriously, make distinctions, and never presume that the present is just the past in disguise. Greil Marcus falls into that last trap, I’m afraid, by shifting from discussing the affinities among countries to imagining a Fascist International with poles in the US and Russia. Whatever we are facing, it is not twentieth-century fascism. Hell keeps on disgorging new demons to beset us. And as seasoned exorcists know, each must be called by its proper name before it can be cast out.'

Both Lilla and McAuley have reasonable things to say, and the radical right of 2018 is not fascism in 1933, Trump is not a Mussolini (what exactly he is we will know in a few years from now) but despite the differences we can point out some similarities without getting too hysteric.

The weak point in Lilla's argument is a common weakness. Voters feel attracted to the radical right because of unsuccessful integration of Muslim immigrants (in Europa) and because they are the losers of globalization, or so you can read and hear.

It doesn't help to call all voters of FN in France or Trump in the US fascists, and probably some of their grievances are understandable, but too often explanation becomes a rather paternalistic excuse: I'm not like these people, mind you, but I understand these people very well. After the horse whisperer we have in almost every country nowadays the angry citizen whisperer.

The echec of the Democrats in the US is different from the echec of the SPD in Germany. Fear and disgust of the other are not always connected to economic malaise. And without the malaise the disgust is much harder to understand or to excuse.

The question is: how much homogeneousness do we need? How much do we want? Simple questions, but probably without easy answers. It's never pleasant to see your own ugliness in the other.