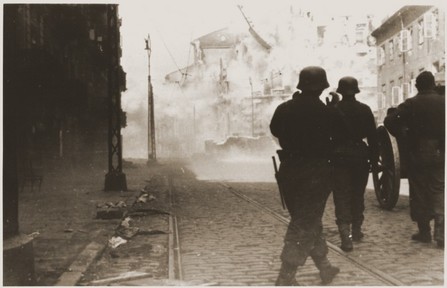 On Poland and history, convenient and less convenient - Shaun Walker in the Guardian:

'The Warsaw ghetto was the largest of all the Jewish ghettos in Nazi-occupied Europe, with around 400,000 Jews crammed into a little over a square mile of land. Most were killed, either through execution, starvation or after deportation to concentration camps. The ghetto was razed in 1943 after a heroic but doomed uprising by its inhabitants. Today, the area of the former ghetto is part of central Warsaw, with only a few plaques and small monuments to remind visitors of its dark past.

The museum will be housed in a former children’s hospital, built by Jewish philanthropists in the 1870s. It treated thousands of children during the ghetto period, many for malnutrition and starvation, and most of its patients were eventually sent to their deaths at Treblinka. The doctors chose euthanasia for some of the children rather than see them deported to the concentration camp.'

'Additionally, there has been a recent spate of brazen cases of antisemitism in segments of Polish society. In March, a rightwing Polish newspaper ran a front-page “How to spot a Jew” headline, while on Good Friday, people in the town of Pruchnik dragged an effigy of a Jew through the streets before hanging it and setting it on fire.

Blatman said putting the museum into the broader Polish context will help educate a new generation of Poles about the Holocaust: “It will open in five years and will have to speak with Polish society, where there will be hardly any survivors left alive. To make this history relevant to the anonymous teenager in Warsaw who will come in the future to this place, we have to connect it to his history, his city, something that speaks to him.”

The museum has drawn comparisons with the House of Fates, a new Holocaust museum in Budapest that has been completed but has not opened, due to a controversy about how it portrays the events of the second world war in Hungary, where a collaborationist regime deported the country’s Jews, most of whom died at Auschwitz. The current government of nationalist prime minister Viktor Orbán has been accused of glossing over the role of the Hungarian state in the Holocaust.

“It seems that both new museums wish to focus chosen aspects of the Holocaust, neglecting others which might be less convenient to the current local authorities,” said Dreifuss.'