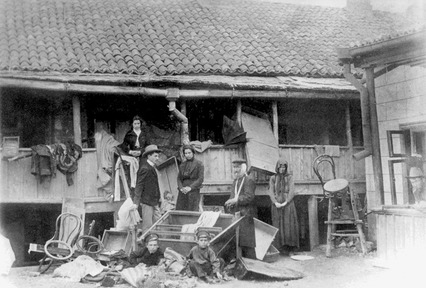 On Kishinev, pogroms and self-defense, Avishai Margalit in NYRB:

"Wittgenstein posed the question: Why did one crucifixion captivate the world for two thousand years, while tens of thousands of other people crucified by the Romans remain utterly forgotten? One obvious answer is that we react to stories, not statistics: a haunting story exists for one crucifixion; statistics barely account for the rest.

Steven J. Zipperstein has written a smart and sensitive book about an event—the pogrom of 1903 in the Bessarabian city of Kishinev, on the southwestern edge of the Russian Empire—that poses a similar question. Why did this pogrom receive worldwide attention and acquire a symbolic status in modern Jewish life as the exemplary pogrom, although 'only' forty-seven Jews were killed? Compared to the 1905 pogrom in Odessa, in which 2,500 Jews were murdered, the Kishinev Pogrom seems small-scale. And yet the Odessa Pogrom never seized the Jewish imagination or, for that matter, the world’s. What made Kishinev so memorable?

The Kishinev Pogrom lasted a day and a half. It began on Easter 1903, a dry, sunny April day. The weather is important: Zipperstein believes that had it rained, it would all have turned out differently. While pogroms were usually chaotic, there was some method to the one in Kishinev, which strengthens the suspicion that the tsarist government was behind it. The houses of Jews were specifically targeted: a group of children hurled stones at them until the adults broke in, brandishing clubs. The perpetrators—among them a curiously large number of seminarians—had pillaged a Jewish-owned liquor store, so they were fortified by considerable amounts of alcohol."

"The Bund, by far the larges Jewish socialist party, tried to combine universal salvation and a deep commitment to its fellow Jews, especially to the Jewish proletariat. The Bund stressed however. that the solution to the Jewish problem should be found within the Jewish communities themselves ad not in some utopian territory. In this it differed from 'territorialists' who attempted to find a place where the Jews could live safely and freely - places such as New Jersey in the US or Santa Fe in Argentina. For a while the tragedy of Kishinev convinced may (even Zionists) to accept the idea of Uganda, which had ostensibly been offered by the British, as such a dwelling place.
And then there were the hard-core Zionists for whom only the Holy Land in Palestine would provide the solution for the Jewish predicament, for it was the only place to which Jews could be motivated to move as an organized nation. While the debate was still raging, tens of thousands of Jews began to leave tsarist Russia on their own, not waiting for the ideologues to solve their notion of salvation."

This is true to this day, don't wait for the ideologues to solve your notion of salvation.