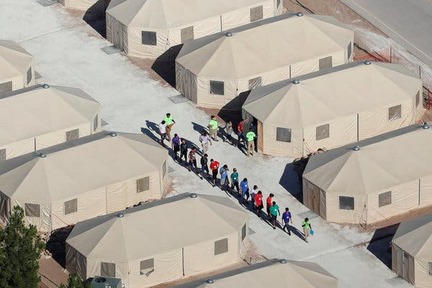 'The use of Nazi imagery is not exclusive to the ultra-Orthodox. In Israel, the term “Nazi” is freely applied not only to malevolent Muslims but also to anyone perceived as being cruel or inconsiderate. Although the characterization has receded from public discourse – Ben Gurion, remember, routinely described Revisionist leader Zeev (Vladimir) Jabotinsky as “Vladimir Hitler” and Menachem Begin as a “Hitlerite type” - it remains in common usage in day-to-day life. Your tough army commanders are Nazis, unrelenting policemen are Nazis, tax auditors are Nazis and even the football referee who ruled for the other team is a Nazi. And everything, from massive traffic jam to basketball debacle to a botched wedding, is a “Shoah”.
The same is true, albeit to a lesser degree, of “concentration camps.” Israeli newspapers routinely report on the “concentration camps” set up China to contain their Uyghur minority. The same term was applied in Rwanda, Bosnia and ISIS held camps in Iraq and Syria. When Israeli protestors demonstrated against the establishment of detention centers for what Israel describes as “illegal immigrants” from Africa, they waved placards saying that these were “just like concentration camps.”

Before Ocasio-Cortez was portrayed as having “desecrated the Holocaust” by using the term “concentration camps”, it was the lingua franca outside of Israel as well. Bill Clinton described Serbian holding pens for Muslim Bosnians as “concentration camps”, the same term used by Republican Senator Marco Rubio last year in order to blast China. In 2017, Pope Francis said that the overcrowding in camps for refugees is reminiscent of “concentration camps”.
Don’t get me wrong: No matter how horrid the conditions in the detention centers visited by Ocasio-Cortez on the U.S. southern border, they’re not even on the same planet as the elaborate system of camps set up the Nazis, in which millions of people died. The detention centers don’t supply slave labor, don’t starve people to death, don’t expose them to deadly diseases, don’t use them for medical experiments and don’t send them on for extermination in gas chambers. Ocasio-Cortez’s analogy was a facetious provocation, which yielded the exact result she was looking for: Media attention on the camps – and on herself.
The concerted eruption of righteous indignation against Ocasio-Cortez was nonetheless obscene, especially since she hadn’t even mentioned the Nazis – her allusion to the Holocaust was inferred from her use of the term “Never Again”. The motivation of her Republican opponents is at least clear: To inflate Ocasio-Cortez to mammoth proportions and to taint the entire Democratic Party with her brand of left-wing radicalism, in an effort, among other things, to realize the GOP’s long-held but regularly-frustrated dream of attracting more Jewish money and vote. Unfortunately, the same strategy probably played a role in generating the blanket condemnations of Jewish groups, many of which are funded today by right-wing donors with the same ideological goals.'

The misuse of Nazi imagery, the frivolous use of certain metaphors has been widespread and is nothing new.
And when exactly a prison system can be labeled a concentration camp is open to debate, but the moment assimilation becomes a silent Holocaust and a massive traffic a shoah time has come to search for another hyperbole. It's a thin line between the frivolous Nazi metaphor and denial of the past.