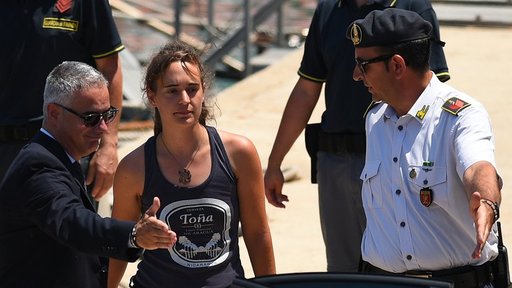 On the sea, migration and cynicism - der Spiegel writes about Carola Rackete:

'Similar to the way Greta Thunberg has become a star of the movement to save the climate, Rackete has now become an icon of the debate over refugee policy. She became famous as a result of videos in which she soberly and precisely described the situation on board the ship and announced her plan to head for the Lampedusa port despite the ban. Her sentence: "I'm bringing them to safety" went around the world.

At the same time, an outpouring of hate directed at Rackete has also flooded social media networks. Salvini, meanwhile, refers to her as "lawless" and as a "rich German."

In an interview with DER SPIEGEL, Rackete says the role in which she now finds herself isn't one that she wanted. It's "not about individuals like me," she says.

But the case of Sea-Watch 3 and Rackete has laid bare just how contradictory the European Union's migrant policy is. And it has again shone the spotlight on the brutal reality of what is taking place in the Mediterranean. Namely, that the EU is allowing migrants to drown and is pursuing a policy that, just a few years ago, only right-wing populists dared propose.

This spring, the EU completely ceased all efforts to save refugees from the Mediterranean and is now only monitoring the situation from the air. It is also cooperating with the Libyan coast guard, which has been expanding its area of responsibility since 2017. The Libyan ships intercept migrants off their coast and bring them back, where they are confined in camps and many are subjected to torture and rape. Some are reportedly forced to take part in the country's ongoing civil war.

At the same time, private persons who have set out to sea to save migrants from drowning have been criminalized by Italy and Malta. The countries have closed their ports to such ships and are pursuing charges against those who operate them.

According to a poll carried out by German public broadcaster ARD, almost three-quarters of all Germans believe that migrants should be assisted when they run into trouble at sea and that those who help them should not be subject to prosecution. Sixty-three percent find it incorrect that the EU has ceased efforts to save migrants.

The reality is that there are hardly any private aid ships currently operating in the Mediterranean. It used to be that up to a dozen ships were patrolling the waters at any given time, but now, there aren't any at all on some days. One of the few that is still operating is the Alan Kurdi, operated by the German organization Sea-Eye.

Almost no Mediterranean country is willing to take in migrants who have been saved from the sea. According to the German Interior Ministry, there have already been six conflicts focusing on which EU member state would accept refugees from an aid ship. In the case of Rackete's ship, the conflict involved France, Portugal, Finland, Luxembourg and Germany.'

'According to that confidential report, which DER SPIEGEL has obtained, migration across the central Mediterranean has dropped by 83 percent within one year. Part of that reduction is the result of expanded support for the Libyan coast guard, with the report noting that an additional 325 members have been trained. The "deterrent presence" has led to a reduction in the smuggling of humans, weapons and oil, wrote Italian Rear Admiral Enrio Credendino, leader of the Sophia operation, in a letter to the EU in January. The "reduced presence of NGO ships," he added, allows the Libyan coast guard to "act more effectively."

The numbers make it look as though the EU has been successful in reducing migration. But there hasn't just been a reduction in the number of migrants risking the crossing, there has also been an increase in the death rate among those who do try. It is more than twice as high as it was three years ago.

And there are still a lot of people who are unwilling to accept the situation as it is. People like Carola Rackete.'

In politics we must distinguish necessary cynicism from unnecessary cynicism, to not save people from drowning is one thing and an unjustifiable thing, but to criminalize people who are trying to save the almost drowned is an act of barbarism.