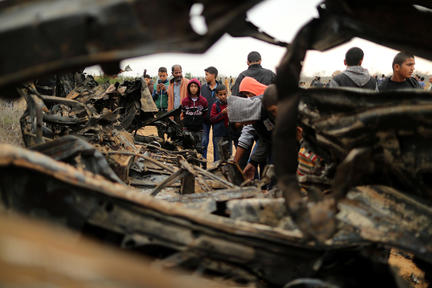 On botched operations and near disasters, and coded language, Amos Harel in Haaretz:

'But we should make no mistake about the magnitude of the shake-up in Military Intelligence and special operations. This was an unprecedented failure that will bring about changes both structural and conceptual in the way Military Intelligence and its units operate. The failure has already reaped a reshuffle in senior positions in special operations. The commander of the force that carried out the operation, a lieutenant colonel, has recently asked to be relieved of his duties before completing his term. The brigade commander, Brig. Gen. G., is to retire soon, with the extraordinary incident in the background.

The operation in Khan Yunis took place on the evening of November 11, after months of detailed planning involving the classified unit that carried it out and the entire intelligence community. It was preceded by precise training. The forward command, as is common in such sensitive operations, consisted of then-IDF Chief of Staff Gadi Eisenkot, Military Intelligence chief Tamir Hayman and the head of the Shin Bet security service, Nadav Argaman.
The operation’s goal still cannot be revealed. Arab-language media outlets showed communications equipment that according to the Palestinians had been left behind, and it was speculated that the operation was designed to install listening equipment. The General Staff has only said that the operation involved highly important intelligence actions to provide information about events in Gaza.
The unit, which operated in the densely constructed neighborhoods of the city of Khan Yunis in the central Gaza Strip, was divided between two vehicles. One was a commercial car, which according to Hamas carried several women wearing traditional Palestinian garb.

For some reason, which the army is not explaining in detail, something about their behavior stirred the suspicions of local Palestinians, among them members of Hamas’ military wing. Hamas members surrounded the van and asked the occupants to identify themselves and say what they were doing there. According to the Palestinians, the men and women in the operation carried false documents identifying them as Arabs.

According to the General Staff, the questioning went on for about 45 minutes and became increasingly aggressive, and reached its height when the Hamas men began shaking the soldiers by the collars of their shirts.
The Hamas members were under the command of the Hamas military wing’s local brigade, who lives in the area. When the Hamas members entered the scene, the commander of the force decided to act. The commander, identified here as A., was sitting in the back of the van and faced a complicated situation: One of his men was surrounded by Hamas men some distance from the van. Another soldier, Lt. Col. M., was also outside the van at that point.
M. distracted the Hamas men and in the split second that this gave A., the latter acted. He pulled out his handgun and opened fire. Three Hamas men were killed, but apparently Lt. Col. M. was hit by the same fire. A. stormed out of the vehicle to free one of the soldiers who was surrounded. In the second part of the incident, two or three Hamas men were killed and an Israeli soldier was wounded. Other soldiers began to fire together with A.'

'Two main reasons were identified for the failure: One involves what will be called here, within the limitations of military censorship, difficulties in the action’s operational perimeter.
It turns out that there was a lack of balance between the actions of the force. The force was considered so experienced and well-trained that it was apparently saddled with too great a burden without putting enough thought into the details of what could go wrong. It also emerged that problems described as “micro-tactical” – that is, at specific points – could have contributed to Hamas’ discovery of the force.'

Difficulties in the action's operational perimeter - that can mean many things, probably too many things. The same can be said about "micro-tactical" problems.

What was the behavior of the "women wearing traditional Palestinian garb" that they stirred the suspicion of local Palestinians?

Why is the identity of the deceased officer still classified?

What was the objective of the operation i.e. why was decided that such an operation was worth the risk?