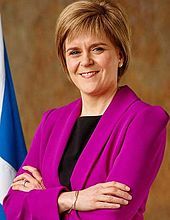 On the end of Britain and Boris Johnson, James Butler in NYT:

"In Scotland, rancor at the sense that the country’s vote counted for little and subsequent repeated bouts of parliamentary chaos have led to renewed calls for a second independence ballot. Nicola Sturgeon, the first minister, insists Scotland will hold one if Brexit takes place. One of the most adroit politicians in Britain, Ms. Sturgeon knows that despite widespread misgivings about Brexit, the majority needed for independence does not currently exist. But recent polling suggests a Johnson government might tilt the scales in her favor. An independent Scotland may be conjured out of the chicanery of Mr. Johnson’s rule."

The numerous effects of chicaneries by our leaders: destroy everything you once claimed you believed in.
Nationalism: destroy the nationstate and call the destruction love.