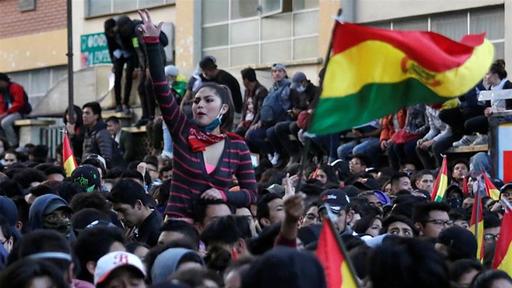 "In a spasm of violence related to last month’s disputed presidential election, protesters kidnapped the mayor of a small town in central Bolivia on Wednesday, forcibly cut her hair, drenched her with red paint, made her sign an improvised resignation letter, then marched her through the streets barefoot, witnesses said.

The protesters had accused the official, Patricia Arce, mayor of Vinto, of orchestrating a pro-government mob that tried on Wednesday to break up an antigovernment blockade, a clash that resulted in the death of an antigovernment protester, officials said.

Ms. Arce is a member of the party led by President Evo Morales, who claims he won a fourth consecutive term in the Oct. 20 election by a sufficient margin to avoid a runoff. But opponents contend that the election was marred by fraud and have paralyzed the nation with protests that have erupted into clashes with security forces. At least three people have died in the demonstrations."

"A team from the Organization of American States is in Bolivia conducting an audit of the election, but the results are unlikely to ease tensions. Carlos Mesa, Mr. Morales’s main challenger, has dismissed the audit and has urged his supporters to remain in the streets.

Mr. Mesa and his supporters say the vote was rigged. After polls closed on Oct. 20, Bolivia’s electoral tribunal released a preliminary vote count that suggested Mr. Morales had fallen short of the 10-percentage-point lead he needed to avoid a runoff.

Election officials stopped providing updates for nearly 24 hours without giving an explanation. But when results were finally updated the night after the election, the final tally put Mr. Morales ahead with just enough of a lead to avoid a runoff, spurring the opposition to take to the streets in protest."

Once the left pinned its hopes on Morales, but he turned out be as authoritarian as the average dictator in Latin America, and since world lost interest in Latin America, somewhere in the eighties of last century already, he could march on without much pressure from outside.

The tensions won't be eased anytime soon I'm afraid, but the rest of the world is too busy with itself.