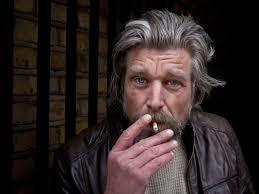 On Hitler, Knausgaard and some other demons - Christopher Clark in LRB:

"Something very strange happens in the middle of The End, the sixth and last volume of Karl Ove Knausgaard’s titanic work of self-description. At around page 482, the book swerves away from scenes of family and social life, and plunges, like a car crashing through a safety barrier, into a prolonged reflection on Adolf Hitler. For 360 pages Knausgaard discusses Hitler’s youthful longing and seriousness, his love for his mother, his struggle with an authoritarian father, his refusal of the destinies prescribed for him by convention. Long passages are given over to summarising, or simply quoting from, the first volume of Mein Kampf, written while Hitler was in prison in 1925. Knausgaard reflects (twice) on that moment in 1945, preserved on film, when Hitler emerged, ‘his hands shaking with sickness’, from a bunker beneath Berlin, ‘with the world in flames and millions of people dead as a result of his volition’, to greet a line of young boys who had been called up to defend the collapsing city. In that perilous moment, he writes, Hitler revealed, ‘in a fleeting gleam of his eyes … something warm and kind, his soul’. ‘He was a small person,’ Knausgaard concedes, ‘but so are we all.’ And out of these and many other thoughts about Hitler spiral a long series of reflections on modern life, accompanied by high-end literary and cultural references. Not until page 848 does The End escape from Hitler’s orbit. In the meantime, the reader has trekked across a massive, crater-like depression in the book’s structure. It is like coming up for air when we are finally allowed to re-inhabit the body of the writer: ‘I sat down again, poured myself some tepid coffee from the vacuum jug and lit another cigarette.’

What is Hitler doing in this book? I suppose his appearance at some point was inevitable, given that the cycle’s Norwegian title, reluctantly accepted by Knausgaard’s publisher, was Min Kamp. (The German translator refused to use Mein Kampf as the title, and the books are published in Germany under the clunking rubric Das autobiografische Projekt.) Asked why he chose the title, Knausgaard has tended to fudge. A friend suggested it, he told one interviewer. It was better than his other working titles, ‘Argentina’ and ‘Parrot Park’. The Hitler essay at the heart of Book 6 doesn’t answer the question either, not directly. We have to infer its purpose by examining the services Hitler performs for the man who has summoned him back from the dead.

"To turn to Peter Longerich’s Hitler: A Life, superbly translated by Jeremy Noakes and Lesley Sharpe, is to re-encounter the sober, appraising diction that Knausgaard deplores in Kershaw’s writing. Longerich is in no doubt that his subject was emotionally ‘retarded’ and unable to feel empathy. Hitler’s early life reveals, he writes, a ‘lack of feeling in his dealings with others’, a ‘marked egocentricity’ and a tendency to seek refuge in a ‘fantasy world focused on himself’. Even as a soldier during the First World War he stood out as an ‘eccentric loner’: his only emotionally significant relationship was with his dog Foxl, which was allowed to sleep with him.

Longerich’s meticulous account touches on many issues, from Hitler’s management of dissent within his party to his thoughts on foreign policy, rearmament and the economy; from the tactical skill with which he handled the relations between his movement and the political elites to his understanding and consolidation of his own leadership role. Longerich has little time for the notion that Hitler’s charisma was crucial to sustaining the regime’s authority. The monopolistic control of media and public communications was more important than the ‘Hitler myth’ explored by Kershaw, or, for that matter, the spiritual-erotic union imagined by Knausgaard between the ‘we-less I’ of Hitler and the ‘I-less we’ of the German people.
Two strands of Longerich’s argument are especially worthy of note. The first is that, despite the claims he made throughout his life, Hitler’s early career was not marked by a lonely mission to save his country. On the contrary, his entry into politics was orchestrated by powerful interests. It was the Reichswehr (German Army) Information Department in Munich that arranged for Hitler to be trained in public speaking and then employed him as an agitator to immunise the soldiers still serving in Munich against the appeal of socialism. As a naturally talented popular speaker who stood out for the vehemence of his antisemitism, Hitler soon merged into a network of army officers, racist journalists and extreme right-wing organisations, all of them united in their aim of building a platform for anti-socialist agitation. In 1920-21 these groups were also sponsored and encouraged by the Bavarian government under Gustav von Kahr, who worked hard to transform Bavaria into a ‘cell of order’ in which right-wing groups could flourish."

"Longerich’s book moves steadily over its terrain, like one of those cleaners on the floors of swimming pools that collect drowned insects and dead leaves. Brendan Simms’s Hitler: Only the World Was Enough is a very different undertaking; written with passion, it grabs the reader by the elbow and propels her from the very first page towards one, ultimate conclusion. The central argument is that at the centre of Hitler’s worldview was a profound preoccupation with ‘Anglo-America’."

(...)
"Hitler got a lot of things wrong, Simms tells us, and his career was ultimately a ‘catastrophic failure’. But he was ‘exactly right’ about ‘the overwhelming power of Anglo-America’ and ‘entirely accurate’ in his conviction that the Germans were too weak to prevail against ‘the “Anglo-Saxons”, the global “master race”’."

"Knausgaard recalls the sensation of near nausea that overcame him as he began reading Mein Kampf: ‘Hitler’s words and Hitler’s thoughts were thereby admitted to my own mind and for a brief moment became a part of it.’ Simms confesses a similar apprehension: ‘the author,’ he writes, ‘has tried throughout to get into Hitler’s mind, without letting [Hitler] get into his.’ Whether Hitler gets into our minds, or we mislay something of our own inside his, it’s clear that this strange and hateful man, who has been dead for 74 years, is still messing with our heads."

Last summer I read Mein Kampf in its entirety (in a new Dutch translation) and the profound preoccupation with Anglo-America can not be found in this book as far as I'm concerned. (Read my review, in Dutch, here.)
The fact that Hitler was less of a self-made man than he wanted the Germans, and the rest of the world, to believe is a more convincing argument than the argument about Hitler's obsession with Anglo-America. For example, the German historian Heike B. Gortemäker made the point that Hitler's rise was orchestrated in an interview with a German newspaper.

"Mein Kampf" was a tough read, Hitler may have even a seducer but definitely not as a writer, however I must admit that from time to time the reader feels that the author A. Hitler is not completely unaware of a thing called "style" and he was much more of an avid reader than many politicians today.

It's the first maybe even unavoidable provocation that comes to mind when a more less educated person reads "Mein Kampf": I can identity with the author, against all odds I can do it.
Yes, he was a human being, he used articles and prepositions, I'm just like him, I know what anger is, I have a knack for heroism too, et cetera.

Knausgaard's obsession with Hitler says a lot about Knausgaard and his own father, as Clark points out with some subtlety.
Hitler may be messing with our heads, but that's because of his deeds, of the war and the extermination of European Jewry, of his movement, which was much bigger than the Führer, not because of his persona or his writing skills.

The demon is not Hitler, all of his followers are the demon, and the knowledge that so many people today are ready and able to follow authoritarian leaders who have nothing to offer but the same old hate.