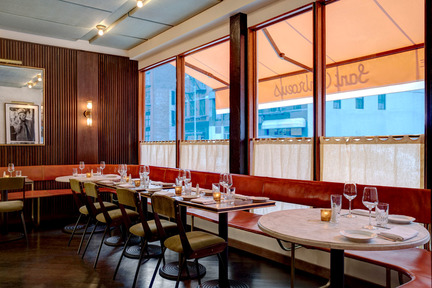 A friend sent me this article:

'Giuliani was overheard discussing the plans with an unidentified woman while at a crowded New York City restaurant, Sant Ambroeus, over lunch on Saturday. The conversation, which lasted more than an hour, touched on details including dates for recording and releasing the podcast, settling on a logo, and the process of uploading the podcast to iTunes and other podcast distributors.
Two people who overheard Giuliani's discussion reached out to CNN and provided a recording they decided to make of the conversation. They contacted CNN unprompted after reading a recent story about Giuliani and the President's ongoing relationship. The people asked not to be identified and provided the audio recording on the condition that it not be published.
"Many Americans want to hear directly from Rudy Giuliani," said Christianné Allen, a spokeswoman for Giuliani, who confirmed to CNN that he discussed the podcast idea at lunch on Saturday.'

It would be a terrific idea for a podcast: Here is Rudy Live from Sant Ambroeus with a few other important messages for the American people and other lovers of spaghetti bolognese and Sant Ambroeus.

A small anecdote: Many years ago Netanyahu was having dinner at Sant Ambroeus Upper East Side, that short period of time when he had been prime-minister of Israel, but was out of office, plotting his comeback, somewhere at the beginning of the century.
A Swiss friend of mine pointed at him and asked me: "Isn't that Milosevic?"
I said: "Milosevic is Milosevic and Netanyahu is Netanyahu."

Another small anecdote: Many more years ago, I saw Mr. Giuliani eating spaghetti at Via Quadronno on 73rd street. At that time he was eating and whispering, but apparently he lost his lust for whispering.