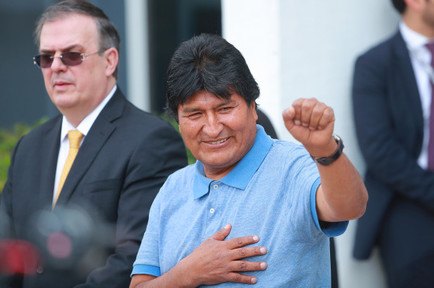 Yascha Mounk in The Atlantic on optimism, Bolivia and the season of protest:

'Morales’s resignation comes during a season of protest. From Beirut to Paris, and from Santiago to Hong Kong, millions of people have been taking to the streets to hold their governments accountable. It would be tempting to believe that all of these mass movements are caused by the same factors, and aim for the same goals.

There certainly are some important commonalities. In every case, protesters have come to believe that the powerful are insufficiently responsive to their demands and are ignorant of their desires. And in every case, they have made use of the ample opportunity for mass mobilization created by social networks from Facebook to WhatsApp. And yet, the hidden differences between these protest movements are ultimately more important than their obvious similarities.

One set of protesters, such as the striking students in Chile and the gilets jaunes in France, is expressing discontent with democratic governments. This group demonstrates that, in at least one important respect, the political scientist Francis Fukuyama was too optimistic in his famous thesis about the end of history. Liberal democracy, he asserted in 1989, would be the final form by which advanced human societies governed themselves, largely because they were uniquely able to manage their “internal contradictions.” Recent years show that he was overly sanguine about democracy’s stability. As the huge crowds in Paris and Santiago demonstrate, many democracies are struggling mightily to stop their internal contradictions from blowing up the system.

In many countries, a mixture of economic stagnation, growing inequality, and rapid cultural change has made a large number of citizens deeply skeptical about their democratic institutions. Whether or not the protests in Paris and Santiago will ultimately find expression in party politics, the forces that fuel them are similar to those that have swept a wave of populist politicians into office from Brazil to Mexico, and from Italy to the United States.

Another set of protesters, by contrast, stands at a much later stage in the struggle between democracy and autocracy. The citizens who have come out in great numbers in Caracas and La Paz, and even those who are starting to push back against their autocratic governments in Budapest and Istanbul, are not at all disenchanted with the shortcomings of democratic institutions. Quite the opposite: As they start to see their democratic rights and freedoms threatened in their daily lives, they are more and more determined to win them back.

This shows that Fukuyama’s much-maligned thesis may contain rather more wisdom than many now believe. While liberal democracy has proved much more fragile than most social scientists assumed a few short years ago, an alternative political system that would better resolve its own internal contradictions is not in sight. While populists on both the left and the right have been shockingly skillful at undermining democratic systems with the false promise of returning power to the people, their authoritarian instincts ultimately turn huge swaths of the population against them. The core values of liberal democracy—individual freedom and collective self-determination—may be more universal than recent setbacks seem to suggest.'

'In that sense, the inspiring victory of the Bolivian people has great meaning far beyond Latin America. Morales’s sudden loss of support should not only scare embattled leftist dictators, such as Maduro in Venezuela; it should also terrify far-right populists, such as Hungary’s Orbán or Turkey’s Recep Tayyip Erdoğan, who still appear to have a firm hold on power.'

Yes, the core values of liberal democracies may be more universal than was previously thought, and more people might be willing to defend these values.

But I don't believe that Bolivia and the uprising there - there is still disagreement whether it was a coup or an uprising, most probably a bit of both - will have much influence on the situation in Turkey. For one, the army after the purges is controlled by mr. Erdoğan and the repression in Turkey is much more severe than it ever was in Bolivia under Morales.

Repression usually works, especially when there's an elite economically thriving under the repression.

And it's always a sign of a failing democracy when elections are not enough to end the rule of a party or a president that is deemed undesirable by, well let's say a majority of the people.

The season of protest might bring some positive developments, for example in Lebanon, but at least the Arab spring and Egypt should have taught us an important lesson. The result of that season of protest: another dictator, a more repressive one, more willing to torture, kill and imprison his enemies than the one before.

And even if the liberal democracy comes to your city, country, village, the disappointment might be huge. See: Poland, Eastern Germany, Hungary.

Let's hope that we can defend and protect liberal democracies without too many seasons of protest. Even though I understand that also the protest is a force that gives us meaning.