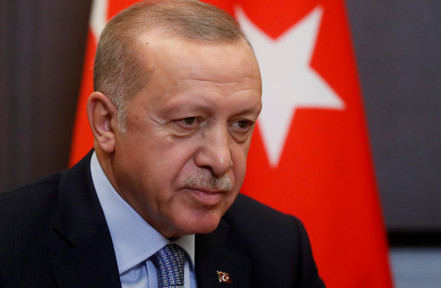 On another almost forgotten war - Zvi Bar'el in Haaretz:

'Fifty Turkish soldiers were killed in February in clashes with Syrian forces in Idlib. Of these, 36 were killed on Thursday in a Russian air force strike and Syrian government shelling. It seems that the Turkish-Russian alliance running the campaign in northern Syria is about to come crashing down.
Turkey has directly accused Russia of responsibility for the killing of its soldiers. Russia, for its part, made clear that the Turkish forces had no reason to be there and had not coordinated their presence. Turkey vehemently denied this, claiming the Russians knew they were there.'

'The opposition parties have accused Erdogan of bypassing parliament and waging the war in Syria for his party's benefit. A few opposition leaders are now demanding that Erdogan stop its military campaign and negotiate with Assad to reach an agreement that would allow the Turkish forces to withdraw.
The opposition claims that Erdogan has not kept his promise of protecting Syria’s unity or removing Syrian forces from major highways connecting Idlib to Turkey, and that the agreement he signed with Russia to establish a “safe zone” in northern Syria has not been kept.
Ordinary citizens and Turkish lawmakers were especially furious that Turkey could not airlift its wounded soldiers in Syria because Russia declared a no-fly zone for Turkish aircrafts. As a result, they had to be evacuated by vehicle on the bumpy roads to Turkey.
While opposition parties and activists last week took a “patriotic” stand and expressed condolences to the families of the soldiers killed, it seems that the incident, the most serious since Turkish forces invaded Syria, could spark a political firestorm this week.
Erdogan knows how to overcome domestic political landmines. His base is strong and the next parliamentary elections will be held only in another three years. But Russia is not going anywhere and Erdogan can’t allow himself to clash head-on with the Kremlin, not only because of Syria, but also because of Turkey’s economic dependence on Moscow. The question is how to reconcile Erdogan’s military and political aspirations in Syria and the staunch Russian opposition to his policies. Erdogan has shown some impressive back-bending in the past. It seems that he will need to exhibit that flexibility again.'

Yes, in order to avoid a war between Turkey and Russia, a war that Turkey probably is going to lose, Erdogan is willing to be flexible. Survival first, principles afterwards.
In the meantime, what does it exactly mean that Turkey is still member of the NATO? To keep Turkey in is slightly better than to push Turkey out, but besides that? The fact that Erdogan can blackmail the EU by threatening to push Syrian refugees to Greece is only possible because Syria is a still war-ravaged country. Refugees and war, there is a connection. The extreme-right is in denial, but no, refugees are a side-effect of war.

'The Syrian government advance has displaced nearly a million civilians who have fled to areas near the Turkish border. Turkey says it is already hosting millions of refugees and does not have the resources to let more enter.'

'The attack on Turkish troops last week came after Turkish-backed rebels retook the key town of Saraqeb, to the north east of Balyun. Russia denies its own forces were involved in the fighting in the Balyun area.
But Russia and Turkey are backing opposing sides in the civil war. Turkey is opposed to the government of Bashar al-Assad and supports some rebel groups.'

Yes, Turkey is also responsible for creating the refugees, and then Erdogan claims Turkey is overwhelmed, so the EU needs to pay more. Talking about Mafia methods.