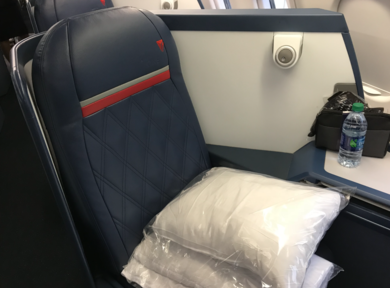 A man on the plane from JFK to Amsterdam was carrying moist towelettes. He was in his forties, wearing shorts and a cap, as if he had just left the gym. He cleaned his chair, the screen, the window, he was cleaning thoroughly for a couple of minutes. Then he started sneezing. While he was sneezing he gave me a few hostile looks.
He ordered a drink, and resumed his work, in other words he took out more moist towelettes and cleaned once again rather obsessively everything around him.
Before landing he didn't wake up and a flight attendant had to tell him that it was time to put his chair in the upright position.
It took her several minutes to wake him up. When she had finally succeeded in doing so he mumbled: "These people are not flight attendants, these people are Nazis."
I might have misunderstood him, but I'm pretty sure that this is what he was mumbling.
Whether his behavior is related to the virus is unclear to me, but it was definitely remarkable.