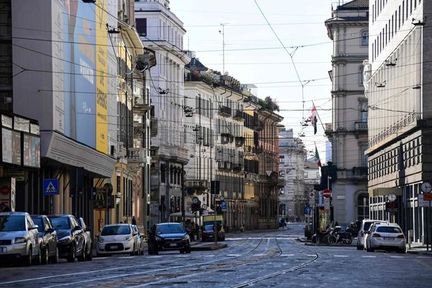 On side effects once again - Bethan Jones and Fabio Montale in NYT:

'The situation for many is bleak. “Everyone here is having problems now,” Mr. Gallinari, the florist, said. “There are lots of people who are going hungry. You can see that their behavior is beginning to change.” Reports of social unrest across the region — shopkeepers forced to give away food, even some thefts — have ruffled a usually close-knit community. “The other night I caught some kids trying to break into my garage,” Mr. Gallinari said. “This is new for us.”

Even so, such incidents are rare. More striking — and representative of neighborhood life in Naples — has been a groundswell of community initiatives, to fill the void of absent state support. Some have set up a mutual aid help line so that volunteers can deliver food and assistance. And certain shops have begun encouraging customers to cover a shopping bill for someone unable to pay, in the Neapolitan tradition of the “caffè sospeso,” or suspended coffee.

The vulnerable workers of Naples, and the south more generally, need more help. The 400 million euros, close to $432 million, the government has set aside for food stamps is not enough. Now there is talk that the government’s next budget might include an “emergency income,” covering those so far overlooked.'

We should not prioritize the economy. In The Netherlands the prime minister stressed that the economy and national health are tow sides of the same coin.
But the moment the lockdown leads to hunger which will lead to anarchy, the state will act to save its raison d'être.
By then probably it will be too late already.
Failed states are something for Africa, Asia, South-America? No, Europe is not a system of immunity.
Perhaps the failed state is coming first before democracy makes its return. And still there are people in Europe who believe that a more or less balanced budget is more important than anarchy.