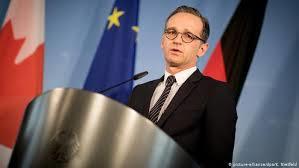 On torturing devices, Europe, China and the US - an interview with German Foreign Minister Heiko Maas, conducted by Christiane Hoffmann and Christoph Schult, published in Der Spiegel:

'DER SPIEGEL: One of Germany's first actions was to ban the export of protective clothing, including to EU countries! It looked a lot like a policy of "Germany First." What do such national reflexes say about the state of the EU?

Maas: Nothing at all. I find it appropriate that every member state first acted nationally. It's like on an airplane: Everyone must first put their own mask on before helping others. If we hadn't done our national homework, we wouldn't have been able to support anyone outside our country. The order in which we did things was correct.

DER SPIEGEL: But this order contributed to the perception that the Germans are selfish and cold-hearted. Can you understand why so many Italians feel as though they've been left in the lurch?

Maas: Of course, there is a history here. The Italians have felt left in the lurch before, namely during the refugee crisis. But this time we're helping: For one, we sent a military plane with seven tons of aid to Italy. By delivering protective clothing and respiratory machines and by accepting Italian patients, we also sent a clear signal: We are on Italy's side.

DER SPIEGEL: Italy has reported around 18,000 deaths from the coronavirus. Isn't it understandable that Germany's aid efforts seem inadequate?

Maas: Italy is suffering unimaginably. This has deeply affected us Germans, too. We have helped where we could and will continue to do so. Right now, we're dealing with the question of how the country can survive this crisis economically. It will be important to see how financially supported Italy feels.

DER SPIEGEL: This week, EU finance ministers debated whether funds from the euro bailout fund, the European Stability Mechanism (ESM), should be tied to strict conditions like they were during the financial crisis. What is your answer to that question?

Maas: In this crisis, we need quick help without any of the strict conditions or torture devices, meaning without the troika or tough austerity measures.

DER SPIEGEL: To mitigate the consequences of the crisis, Italy, France, Spain and others have called for joint bonds to be issued. What are the fundamental arguments against such "corona bonds?"

Maas: The fact that we don't have a majority in the EU is one argument against them. This isn't only due to Germany, but also other governments. In the current crisis, we need quick answers that can be agreed upon in the eurozone. (German Finance Minister) Olaf Scholz and I had therefore suggested bundling different instruments into one toolbox: the ESM, the European Investment Bank, the SURE program and the forthcoming EU budget. These are also the essential elements of the compromise on which the EU finance ministers have now agreed.

DER SPIEGEL: As a Social Democrat, are you in favor of corona bonds?

Maas: Politics is about making possible that which is feasible. It's not about dying in programmatic beauty. With the CDU and the CSU, corona bonds are not possible in this government and the same is true of other European governments.

DER SPIEGEL: In other words, you think corona bonds would be the correct way to go, but you're not pursuing the idea further because of resistance from German conservatives?

Maas: That's neither here nor there. The southern Europeans quickly need a concrete and realistic offer that will help them economically. That's the only thing that matters right now.'

'DER SPIEGEL: The pandemic is the first global crisis in which the U.S. is not playing the role of leading global power, is completely absent. In the past, they were the ones leading international crisis management. Are we witnessing a decisive moment in a long-term shift in power?

Maas: This shift in power is nothing new. Independent of the U.S., all Western democracies must have an interest in ensuring that this shift doesn't gain new speed in the coronavirus crisis.

DER SPIEGEL: Under Donald Trump, the U.S. has become an opponent of multilateralism. In the current crisis, everyone is first concerned about figuring out where they stand. Are we experiencing another severe blow to international cooperation?

Maas: On the contrary, this crisis will show how important international cooperation is. We are strengthening organizations like the vaccine initiative CEPI and the World Health Organization. If we do not use the instruments that multilateralism offers, it will take much longer to overcome the crisis. Those who do not understand this will suffer longer.

DER SPIEGEL: At the virtual G-7 foreign ministers' summit, it wasn't even possible to agree on a name for the virus.

Maas: Six agreed, only one didn't.

Maas: Nevertheless, together with the British, we submitted a paper outlining measures, a list that the U.S. has now also accepted as a basis.

DER SPIEGEL: Will the coronavirus crisis further alienate Europe and the U.S.?

Maas: That would not be in Europe's best interest. We hope that the U.S. will come out of this crisis better than it went into it. After all, it's undisputed that the U.S. was too slow to act. We'll see to what extent the actions of the American government will lead to discussions in the U.S. as to whether the "America First" model really works. The Trump administration's trade disputes have certainly not resulted in international supply chains now helping to remedy the lack of protective equipment in the U.S. It shows once again: Hollowing out international connections comes at a high price.'

First, the American self-inflicted damage could hardly be better illustrated. Europa sees the US now as it saw let's say China a couple years ago. Economically important, but overall more an enemy than a partner. This may change if Biden becomes president. If. And even then, the damage is already done.

Then, the EU appeared to be weakened as well, if the EU is about putting first your own mask on and then helping others as Mr. Maas is implying some states like Serbia may rightly ask: what do we need the EU for?

But most important, in hindsight Mr. Maas admits that Greece was tortured by the European Commission, the ECB and the IMF. In order to survive the EU should stop torturing weak member states. Unfortunately, a Dutch minister recently appeared to believe that the torture methods of the troika, that brought us very close to a disaster in 2015, should be applied to Italy in 2020. This minister was basically saying to Russia and China: Come in, make the EU obsolete.
You must be either a fascist in disguise or a contemporary marxist to believe that this development should be called progress.