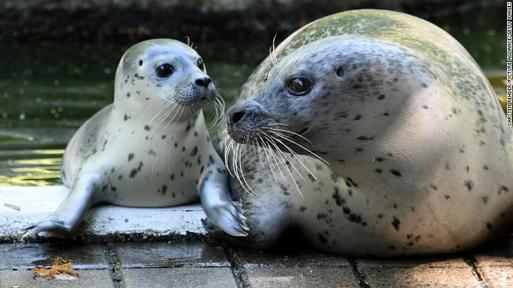 On sacrifices in a zoo - Christopher F. Schuetze in NYT:

'The polar bear would be the last to go.

So says a zoo in northern Germany, which drew up a startling contingency plan if the financial strain caused by the government-ordered shutdown because of the coronavirus outbreak did not ease up soon:

Slaughter some zoo animals and feed them to others.

The director of the zoo, Tierpark Neumünster, about an hour’s drive north of Hamburg, told the German news agency DPA that such measures would be carried out only as a last resort.

“If — and this is really the worst, worst case of all — if I no longer have any money to buy feed, or if it should happen that my feed supplier is no longer able to deliver due to new restrictions, then I would slaughter animals to feed other animals,” the director, Verena Kaspari, was quoted as saying.'

No information was available on which animals would be slaughtered first and which would be saved under the plan. Ms. Kaspari could not be immediately reached for comment. But the zoo, which has about 700 animals over 24 hectares, confirmed her comments on Wednesday.

It also said that a prized polar bear named Vitus, called the largest polar bear in Germany and standing nearly 12 feet tall, would be spared until it was the last animal standing.'

'“Of course, it’s for everyone to decide for themselves,” Mr. Bauer said in a telephone interview on Wednesday. “But if we didn’t have any food, the animal sponsors and the locals would certainly donate some.”

Mr. Bauer, who also leads the German Zoo Society, admitted that since part of his budget comes from the city of Dessau, he has to worry less about costs, even without paying visitors. His zoo also does not have penguins or polar bears, which are expensive to keep.

The Neumünster zoo’s plan was revealed as Germany’s strategy for stemming the outbreak has drawn global attention. Despite having more than 130,000 coronavirus cases, Germany has a low fatality rate. Unlike the United States and other European countries scrambling to find hospital space and personal protective equipment for medical staff on the front lines, it also has a relatively high number of available intensive care beds and ventilators.'

I bet that many people in the so-called civilized world would rather slaughter a human being than a polar bear or wherever animal there is to be seen in a zoo.

More people will die, but Vitus - first I read Virus, freudian of course - will live.
And whenever tourism attractions will be open again, the zoo in Neumünster will be on my list. It's like visiting the mountain where Abraham almost sacrificed his son.