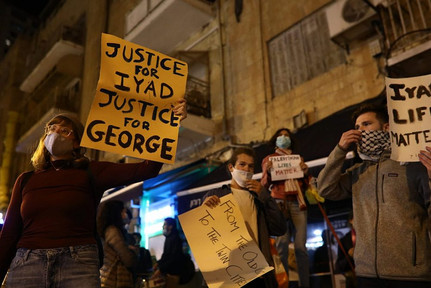 'A few days after Minneapolis, on Saturday morning, in Jerusalem’s Old City, Eyad Hallaq, a 32-year-old autistic man, was on his way to the Elwyn Center for disabled people. Border Police officers claimed they believed he was holding a gun – there was none – and when they called out for him to stop, he started running. The penalty was death. The Border Police, the most brutal of all units, knows no other way to overpower a fleeing autistic Palestinian except to execute him. The cowardly Border Police officers fired some 10 bullets into Hallaq as he fled, until he died. That’s how they always act. That’s what they’ve been trained to do.

The Israel Defense Forces and the Border Police have a special weakness for the disabled. The slightest wrong movement or sound could sentence them to death. In another Old City, of Hebron in March 2018, soldiers killed 24-year-old Mohammad Jabari, who was mute and mentally ill, and whose neighbors called him “Aha-Aha” because those were the only syllables he could say. They ambushed and shot him near a girls’ school, claiming he was throwing stones. He left behind a 4-year-old son, an orphan.'