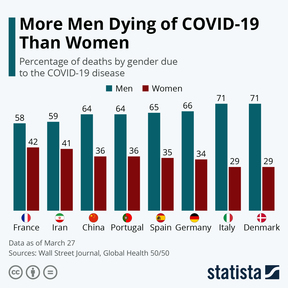 ‘As we report this week, emerging Covid-19 data already shows an important role for social context in generating sex disparities. In Connecticut and Massachusetts there is no sex difference in confirmed Covid-19 fatalities, while in New York and Florida, men account for about 60 percent of Covid-19 deaths. Globally, the male-to-female death ratio varies from a staggering 2:1 in the Netherlands to 1:1 in Iran and Canada. It’s too early to say what accounts for these levels of variation; what they do seem to indicate is that sex difference alone isn’t meaningful without incorporating other factors.
During the 1918 Spanish flu pandemic, with which the coronavirus pandemic has been widely compared, men also died in larger numbers in many places. But this wasn’t because of sex alone. It was because of sex and gender-related differences in both occupations — a social variable — and pre-existing health conditions. During the Spanish flu, men in the military and unskilled manual laborers working outside the home died at far higher rates than the general population, probably because they had less freedom to engage in social distancing; it’s noteworthy that nonmilitary and upper-class males perished at rates similar to women overall. For similar social reasons — they were less able to social distance than women — men in 1918 already carried a significantly higher burden of tuberculosis relative to women when the pandemic began. This, when combined with influenza-induced pneumonia, proved deadly.’

‘A key factor most likely related to male-female differences in Covid-19 fatalities is that men overall are in a poorer state of health than women. In a study examining sex differences in outcomes among Covid-19 patients in China, men were more likely than women to have any comorbidity or two or more of them. Of people with Covid-19 and chronic obstructive pulmonary disease, 83.3 percent were male. Of people with diabetes and cardiovascular disease, 58.9 percent and 62.1 percent, respectively, were male. To be sure, sex-linked biology may play a role in the development of some chronic diseases, but always in complex interaction with class, race or ethnicity, and gender-related variables. Several analyses have already demonstrated that in places where men have higher Covid-19 fatality rates than women, men also, on average, have far higher rates of behaviors such as smoking and comorbidities related to smoking, such as heart disease.’

‘If gendered behaviors and gender-segregated occupations are responsible for greater Covid-19 vulnerability, we owe it to people of all genders to address these urgent, controllable risk factors.’

Men are overall in a poorer state of health than women.
Why this is and what we should do about it, the aim is as much equality as possible isn’t it, is open for discussion.

Nietzsche taught us already that the desire to find a culprit for our suffering can be misleading. So, analyze first, moralize later. Too much moralism is just sentimentality, we left churches, synagogues and mosques but the sermon remains addictive.