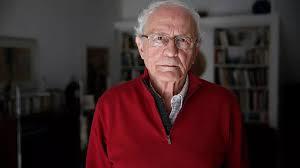 On Zeev Sternhell, France, fascism and the Entlightment - David B. Green in Haaretz:

‘Sternhell continued to the end his decades-long fight to establish his vision of fascism as having its sources in 19th-century France, says Enderlin. Just last year, Sternhell published a book in which he charged a World War I military hero, François de la Rocque, head of the rightist organization the Croix de Feu, with being a fascist. This this month, notes Enderlin, a new volume of essays, “Fascism Francaise” (edited by Serge Berstein and Michel Winock) appeared in France, billing itself as “an answer to the controversy [on that subject] started by Zeev Sternhell.” Nicole Hochner, a political science lecturer at the Hebrew University, stresses that her former colleague and mentor was “a historian of ideas, not of culture, not of events or economics. He believed in ideas. But he also believed that no society was immune.” And so, he worked to understand how “French society, and also Israeli society, with so many humanistic, universal ideas, and which contributed so much in terms of ideas and morality to humanity, is still able to deteriorate.” Hochner continues: “He looked at the foundations, and tried to understand how things went wrong. How did something that started out as positive – the enlightenment; a socialist or national movement; the French revolution – how could it lead or give birth to things so problematic? This is where his main contribution was. To look at processes and see how they could become so poisonous.” Poznanski says that she felt a special affinity with Sternhell because, in her research too, she has challenged the conventional, self-forgiving view of the French regarding their treatment of the Jews during World War II. “These are important topics. They touch upon the question of French identity – especially at a time when [its behavior during] the Shoah is a topic by which you gauge the value of a nation. You see if a country is ethical or not,” she says.’

Indeed, how do things go wrong? The most beautiful ideals turn in reality into killing machines. We don’t need to mention Robespierre here. Rosa Luxemburg saw that the Bolshevik revolution in 1917 turned sour already under Lenin. She herself was not immune for blind spots, who is?

The myth of a purely positive national identity is the source of the unwillingness of many to confront the ugly past of a culture or a country they believe they belong to.
Gratuitous admissions of guilt are not useful nor is, needless to say, the insistence that you should be proud of your culture, your country, your ethnicity, your religion, your sexual orientation.
You can be proud of the things you have accomplished, if you wish to, and also in that case it’s good not do overdo it. But the habit of being proud of the place you were born, which is pure coincidence, is the source of unpleasant misunderstandings.
Shame can be painful and even harmful, although I believe it’s necessary.
But the desire to feel pride for other people’s accomplishments with whom you share a language, a president, a religion, the need to feel pride because you were born in city A in country B instead of city C in country D is the beginning of quite a few pious lies, harmful lies.