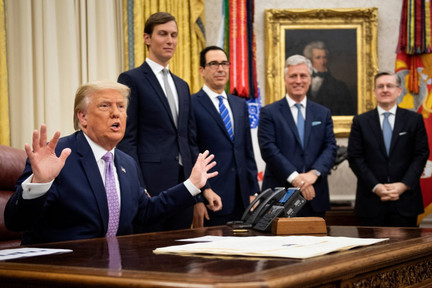 On realpolitik in the Middle East – Anshel Pfeffer in Haaretz:

‘Benjamin Netanyahu never had a real plan for annexing parts of the West Bank. There was no timetable, no map, no draft resolution to be brought to the government or the Knesset. Just a pile of broken election promises and a lot of empty talk. On Thursday, that plan he never planned to carry out has bought him a significant diplomatic coup.
The joint declaration with the United Arab Emirates is not yet a full peace plan. There is no clear commitment from the Emiratis on doing anything yet, certainly not opening embassies in either country any time soon. But this remains the most visible and concrete recognition by an Arab Gulf region state of the hitherto secret alliance with Israel. It is an achievement for Netanyahu that his predecessors, who were prepared to make major concessions to the Palestinians, only dreamed of – and he paid nothing for it beyond what he called the “temporary suspension” of the annexation he was never going to carry out anyway.’

‘The big losers of this development are yet again the Palestinians. Yet another Arab regime is inching towards peace with Israel while they are no closer to statehood. They have been abandoned once again. And to make things worse, even the next U.S. administration, assuming Joe Biden wins in November, endorsed the agreement brokered by the Trump administration. The Biden-Harris campaign welcomed the development as a “brave, and badly-needed act of statesmanship” and promised to “build on this progress.” For the last three decades, the “peace camp” has warned that Israel will become an “international pariah” if it doesn’t solve the Palestinian issue. That isn’t going to happen any time soon, even after Donald Trump leaves the White House. Neither the Arab world nor the international community has much time or appetite right now and for the foreseeable future for exerting any serious pressure on Israel.’

‘This needs to be a moment of reckoning for those who still believe the Palestinian predicament is an injustice that must be solved by two states, one state or any state. The threats against Israeli intransigence have proven as empty as Netanyahu’s promise of annexation. An entire new case for peace with the Palestinians must now be assembled.’

There was a time – when was it again? Two decades ago – that Israel could have been very well become the new South-Africa, a pariah among the nations.

But 9/11 turned out to be a force that changed quite a few things in the world. For one, many citizens in the Western world lost their appetite for fighting injustice elsewhere in the world. They felt they needed to fight for their own safety. Of course, this feeling had more to do with panic than with real threats. Chance calculation is not our biggest talent.

The power of morality turned out to be less delightful than military and economic power. (More or less the same inclinations can be seen when it comes to Covid-19 and the actions of several governments. Some citizens and self-appointed experts want their government to fight the virus as aggressively as they and/or others once wanted their governments to fight terrorism i.e. the Islam. Reality always offers excuses to rationalize xenophobia. And once again, chance calculation is not our biggest talent.)

As we could have seen several years earlier the Israel occupation appears to be sustainable, most of the Arab world couldn’t care less about the Palestinians, and if the ‘Arab street’ does care – which it does to a certain degree – it’s a highly symbolic form of engagement. We care but we have our own problems.

If you want evidence for these developments, just do research and count the length and the amount of articles in the most important Western newspapers about the Israeli-Palestinian-Arab conflict, starting in let’s say 1982, the rather disastrous Lebanon war till now.
My not so spectacular hypothesis: after the second intifada and the beginning of the Iraq war (March 2003) you will see a steady decline with a bump in the summer of 2006.

The time that this conflict was highly emotional for the masses is gone. It’s just emotional for a few individuals, even most Jews outside Israel reached the right conclusion that Israel is not living under an existential threat, at least not more so than other states.

But Mr. Pfeffer is right as well, a sustainable occupation is not a solution, and what appears to be sustainable forever might be less sustainable in two decades or so.

The problem is that right now a two-state-solution appears to be as unrealistic as a one-state-solution. What appears not realistic right now can be realistic in two decades from now. I underline the word ‘can’.
Who would have thought in 1967 of a Sunni-Israeli alliance against Iran?