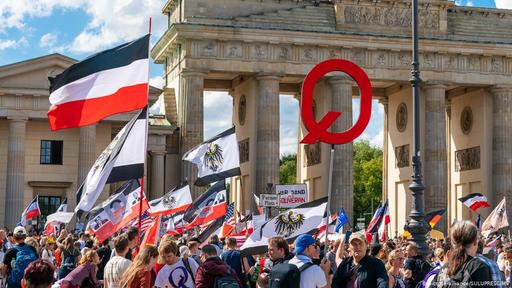 On being popular in Germany – Katrin Bennhold in NYT:

‘Just before hundreds of far-right activists recently tried to storm the German Parliament, one of their leaders revved up the crowd by conjuring President Trump.
“Trump is in Berlin!” the woman shouted from a small stage, as if to dedicate the imminent charge to him.
She was so convincing that several groups of far-right activists later showed up at the American Embassy and demanded an audience with Mr. Trump. “We know he’s in there!” they insisted.
Mr. Trump was neither in the embassy nor in Germany that day — and yet there he was. His face was emblazoned on banners, T-shirts and even on Germany’s pre-1918 imperial flag, popular with neo-Nazis in the crowd of 50,000 who had come to protest Germany’s pandemic restrictions. His name was invoked by many with messianic zeal.
It was only the latest evidence that Trump is emerging as a kind of cult figure in Germany’s increasingly varied far-right scene.’

‘Opinion polls show that Mr. Trump is deeply unpopular among a broad majority of Germans.
But his message of disruption — his unvarnished nationalism and tolerance of white supremacists coupled with his skepticism of the pandemic’s dangers — is spilling well beyond American shores, extremism watchers say.
In a fast-expanding universe of disinformation, that message holds real risks for Western democracies, they say, blurring the lines between real and fake news, allowing far-right groups to extend their reach beyond traditional constituencies and seeding the potential for violent radicalization.
Mr. Trump’s appeal to the political fringe has now added a new and unpredictable element to German politics at a time when the domestic intelligence agency has identified far-right extremism and far-right terrorism as the biggest risks to German democracy.
The authorities have only recently woken up to a problem of far-right infiltration in the police and military. Over the past 15 months, far-right terrorists killed a regional politician on his front porch near the central city of Kassel, attacked a synagogue in the eastern city of Halle and shot dead nine people of immigrant descent in the western city of Hanau. Mr. Trump featured in the manifesto of the Hanau killer, who praised his “America First” policy.
In Germany, as in the United States, Mr. Trump has become an inspiration to these fringe groups. Among them are not only long-established hard-right and neo-Nazi movements, but also now followers of QAnon, the internet conspiracy theory popular among some of Mr. Trump’s supporters in the United States that hails him as a hero and liberator.
Germany’s QAnon community, barely existent when the pandemic first hit in March, may now be the biggest outside the United States along with Britain, analysts who track its most popular online channels say.’

‘The AfD has repeatedly paraphrased Mr. Trump by calling for a “Germany first” approach. But the president is popular in more extremist circles, too. Caroline Sommerfeld, a prominent ideologue of a contingent known as the “new right” with close links to the extremist Generation Identity movement, said she had popped open a bottle of champagne when Mr. Trump won the 2016 election.
The QAnon phenomenon has added a new kind of fuel to that fire.
QAnon followers argue that Mr. Trump is fighting a “deep state” that not only controls finance and power, but also abuses and murders children in underground prisons to extract a substance that keeps its members young. German followers contend that the “deep state” is global, and that Ms. Merkel is part of it. Mr. Trump, they say, will liberate Germany from the Merkel “dictatorship.”’

‘Another reason for QAnon’s spread is that several German celebrities have become multipliers of the conspiracy, among them a former news presenter and a rapper and former judge on Germany’s equivalent of “American Idol.” One of the biggest figures spreading the QAnon conspiracy is Attila Hildmann, a vegan-celebrity-chef-turned-far-right-influencer with more than 80,000 followers on the Telegram messaging app. He has appeared at all major coronavirus marches in Berlin, venting against face masks, Bill Gates and the Rothschild family — and appealing to Mr. Trump to liberate Germany.’

‘Mr. Hildmann’s influence became plain in June, when he mobilized thousands of people to send messages to the U.S. and Russian embassies in Berlin to appeal for help. In the space of a few days, 24,000 tweets had been received by the embassies calling on Mr. Trump and Mr. Putin to “liberate” Germany from Ms. Merkel’s “criminal regime” and prevent “forced vaccination” and “genocide.” Germany’s domestic intelligence agency has warned of the risk of far-right extremists using the pandemic for their own purposes. This past week the agency’s chief, Thomas Haldenwang, said that “aggressive and disruptive far-right elements” were the driving force behind the protests over coronavirus restrictions.
But extremism experts and lawmakers worry that the security services are not paying close enough attention to the violent potential in the mix of QAnon disinformation campaigns and homegrown far-right ideology.’

The rise of the conspiracy theory is one of the nastier side effects of Covid-19, not only in Germany.

The inability and unwillingness to deal with insecurity is the biggest fertilizer for growing conspiracy theories all over the world.

Interesting enough, since Covid-19 the extreme-right is losing ground in many places, for example the AfD in Germany, this might be temporarily, but it’s also a sign that their rhetoric is less attractive when reality itself is more powerful, more theatrical, than the favorite metaphors of the extreme-right.