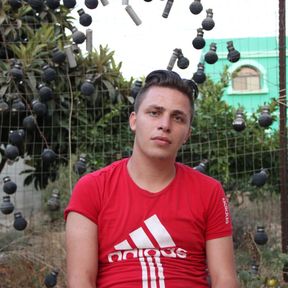 ‘Israel Defense Forces soldiers arrested Hamada (Mohammed) Tamimi in the early hours of Sunday, August 23, in his home in the West Bank village of Nabi Saleh. He was released on Wednesday, August 26, in the evening: Nobody interrogated him, nobody told him why he had been detained, nobody apologized for the false arrest.
“Suddenly the warden came to the cell and told me to get dressed because they were releasing me,” recalls Tamimi, 21. “I had just washed the only shirt I had, and it was still wet when I put it on. I coudn’t believe it.” He smiled while he told this to us; his eyes smiled too. But those were four days of emotional and physical torture for him and his family – the routine kind which so many Palestinians experience, which is not told and not reported.
“If they make a film about every family in our village, they’ll close Bollywood,” says his mother Manal, describing the routine.’

‘Haaretz has been closely following the Tamimis’ concern for their son. In January 2018, when a force from the Shin Bet and the police raided the prisoners’ cells in Ofer Prison, where he was serving a 20-month term for throwing stones at soldiers. The parents have been living in this dichotomy for years: determined not to remain silent – indeed, that’s how they educate their children – and yet afraid for their children.
Last Sunday the soldiers showed up on foot: Some came from the east, the others ascended from the wadi from the west. Hamada, who was awake and on the roof of his house, saw them when they were 25 meters away. He woke up his elder brother, Osama, and went to rouse their parents. Osama went up to the roof and saw the soldiers surrounding the house below, some of them entering the front yard.
He estimates that there were about 50 soldiers, with rifles. He went downstairs, saw soldiers behind the door preoccupied with something, and assumed that they were planning to break it down. One soldier saw him, stuck a gun through an opening in the door (whose glass was broken by his comrades long ago) and ordered him to open it – which was what Osama had planned to do in any case, so the door would not suffer further damage. When he opened it, the soldier again aimed the rifle at him, near his head.
Meanwhile, Hamada woke up his parents, who woke up Samer and Rand, the youngest children. It was 3 A.M. Next door lives Bilal’s mother, Halima, 74, her daughter Nawal and her granddaughter Jana. They woke up when one of the soldiers shook the screen on the window of their room. Meanwhile, several soldiers entered Bilal’s and Manal’s apartment and walked around. Only one was wearing a face mask.
One of the soldiers again asked Bilal for his ID card, and when he asked why they didn’t answer. He addressed them in English. They didn’t really answer. At one point, when they had gotten Hamada’s ID card, the soldiers ordered him to get dressed and join them, and to take his medication with him.
“In other words, they knew that he’s ill,” concluded Manal, adding: “Samer was crying all the time, out of fear for his brother.”’

‘Nobody hit Tamimi. He noticed that one soldier took a selfie with him. He still doesn’t know why he was arrested. Evening fell, and he was driven to the Shin Bet’s Ayalon Prison, to a cell that had only a mattress. His parents didn’t know where he was or how he was doing. He was held in that same cell for three days, in precautionary coronavirus quarantine, and was allowed to go out to the yard for a breather two hours a day. On Monday, August 24, his stomach was growling: He hadn’t received food regularly, only bottles of water. Fortunately, two detainees from Bethlehem who passed by his cell when they were out in the yard, managed to collect some food for him from other detainees and from a criminal detainee, in charge of distributing food. Tamimi didn’t know that his parents were still going crazy with worry.’

‘On Wednesday Hamada’s parents knew that he would be brought for an extension of his detention before a judge, before the conclusion of the 96 hours since his arrest. Manal arrived at Ofer early in the morning. She waited. And waited. And waited. It was time for the judges’ lunch break. Afterward, the lawyer from the Al-Dameer Association for Human Rights said that Hamada wasn’t even on the list of detainees who’d continue to be kept in custody, and the police knew nothingAt about 5 P.M. the lawyer received a certificate of release from the Modi’in Ilit police.
In the evening Tamimi was transported handcuffed, his eyes uncovered, to the Maccabim checkpoint, and released there. Using the cellphone of two residents of the village of Beit Sira who were there, he called home. Within half an hour Bilal came to pick him up. Four of the family’s phones (not Hamada’s) and the camera were returned to Bilal on September 1. The IDF spokesperson told Haaretz Hamada “was arrested by order of the security forces and based on operational considerations.”’

Trampling the rights of people who should be considered citizens after more than 50 years, annexation or no annexation, might be sustainable, but it’s still wrong. Self-interested well-understood sometimes leads to acceptable outcomes, not always unfortunately.